Share
As a fledgling gardener myself, I very much enjoy Mickey Rathbun's column from Northampton's Daily Hampshire Gazette. She always gives sound advice about garden establishment and maintenance. This time of year, I find myself, like her, tiring of spending long hours in the garden, under the hot sun, pulling weeds. With the current heatwave down upon us, this article really hits home.
We homeowners in Western Massachusetts tend to have twice the amount of home maintenance to consider in the warmer months - with the movement from inside to outside of our homes.  Ms. Rathbun gives great nuggets of advice to help manage outdoor work, such as: having a plan before you pull things out of the ground, making notes about what is growing where, and when to plant/prune/separate the plants in your yard, etc.

Get Growing with Mickey Rathbun: Curating the weeds 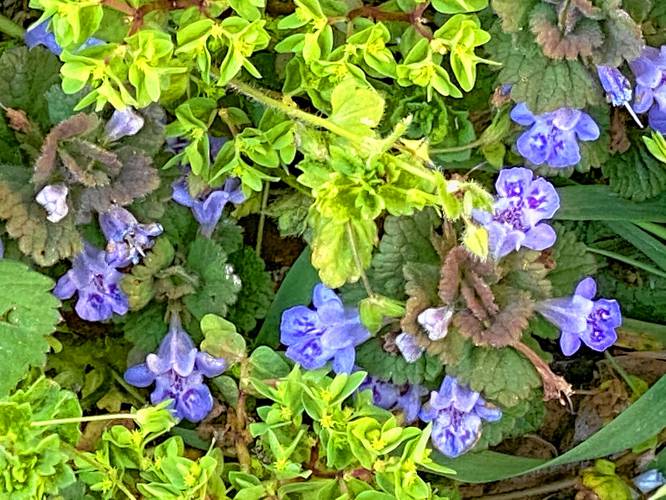 Ground ivy gets a pass from gardener Mickey Rathbun when it comes to weeding. PAT GERBER/VIA FLICKR

Around this time every summer I find myself shifting into a slower gardening gear. The weather’s hot and humid, the bugs are biting, and the garden is what it is, for better or worse.

I’m not in the mood for major revisions, or even minor ones. I wander outside and survey the garden and make a mental to-do list for fall projects. Daylilies will need to be divided along with other perennials that are rubbing shoulders too closely with their neighbors. The abundance of rain we’ve had so far is a blessing, in my book. Growing up in Virginia, I was accustomed to dreaded summer droughts. My father would curse the sky as he surveyed the parched fields where the grass was turning brown and crunchy underfoot.

“It’s raining in Purcellville! It’s raining in Marshall!” he’d snarl, referring to places within a few miles of our farm. “But we’re not getting a drop.” Thanks be to God, our well never dried up, but our showers were limited to two minutes, and nothing got watered but the cows and horses.

This summer’s rain has nourished a bumper crop of weeds. A recent bulletin from the UMass Extension Service emphasized the importance of timely weeding this month. Weeds that spread by seed should be pulled up before they develop seed heads. As the saying goes, a year of seed equals ten of weeds. According to the UMass site, common purslane can produce between 240,000 and a million seeds on a single plant and the seeds can remain viable for up to 15 years or more. (The website ag.umass.edu is full of useful information like this.)

Having been reminded of these sobering figures, I decided to tackle a bunch of weeds that were threatening to take over my lavender bed. There are two types of weeds: the well-behaved ones and the thugs. Well-behaved weeds come out with a gentle tug, their tidy root system intact. Instant gratification! The thugs are a different story. Their root systems are deep and complex. A gentle tug just pulls the above-ground part of the plant, leaving the root system with more strength to spread and multiply.

The worst offender in my garden is the Houttuynia cordata, commonly known as chameleon plant. I confess that I brought this scourge upon myself years ago when I made the mistake of buying it for a shady spot in my garden. I was heartened to read that Margaret Roach, my absolute favorite garden writer and blogger, made the same mistake and is fighting the same fight I am. This plant will grow anywhere. It shows no respect for boundaries, growing right through the center of well-established perennials. It emerges out of cracks in my stone wall where there isn’t a gram of dirt to grow in.

By this time in the summer, I don’t have the energy to take out every weed I find. My mother wasn’t much of a gardener, but she was a gifted horse trainer, and she lived by the phrase “pick your battles.” When it comes to midsummer weeding, those words are my mantra. I call it “curating the weeds.”

There are certain weeds I make peace with. Ground ivy, for example. It spreads like crazy, but it’s kind of attractive and it stays green, and it keeps other weeds from finding purchase where it has established itself. Violets also get a pass from me.

Many years ago I was given an Anemone canadensis, or prairie anemone. I was smitten with its cheery white flowers and interesting serrated foliage. I was less so when it began to take over the entire garden. But I’ve found a place for it, a sort of Devil’s Island for unruly plants. I’m happy to see it colonizing that space and I find myself weeding around it to encourage its spread.

Before pulling out a patch of weeds I ask myself: What else would I like to see growing here? If I don’t have a plan, the weeds will probably stay, at least for the time being.

In addition to the weeds I don’t have the energy to eradicate, there are plants that might be weeds. But then again ... they might be plants I added to the garden and simply don’t remember. I have several thriving patches of something resembling rudbeckia, but I can’t be sure if it’s just a brazen imposter. Note to self: Take better notes!

Mickey Rathbun, an Amherst-based lawyer turned journalist, has written the “Get Growing” column since 2016.