This time of year, we tend to spend more time inside of our homes than out. It's harder to avoid noticing the clutter that inevitably builds up when we are looking at it day in and day out. For many people, figuring out how to lessen the clutter (and maintain systems of organization) is an overwhelming concept. Luckily, there are a number of talented people in the Northampton area who specialize in helping people let go of unnecessary clutter, and create organizational household systems. A recent article in the Daily Hampshire Gazette addresses the issue, and suggests local help. Read on! 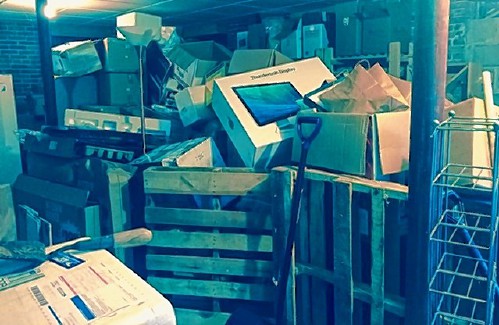 It seems to be a universal problem: Americans have too much stuff.

Take just a quick cruise around the web, and you can find references to article that cite some alarming and depressing statistics, such as that the average U.S. home contains 300,000 separate items; that about 10 percent of Americans rent offsite storage units, despite the typical house size tripling in the last 50-plus years; that the average American family spends over $1,700 a year on clothes.

Don’t believe what you read on the internet? Well, consider what Kira Coopersmith, a professional organizer in Greenfield, says about the issue. She has worked with hundreds of clients in the last several years to declutter their homes and apartments or helped them downsize for a move.

“A lot of us are drowning in stuff,” says Coopersmith. “People can’t deal with it, and it causes a lot of stress ... We’re a consumer society, and, in some cases, our things start taking over our lives.”

As Coopersmith sees it, many people may want to simplify their lives and get rid of a lot of excess possessions — clothes, toys, kitchenware, books, computer equipment, memorabilia and keepsakes — but lack the time and energy to do it.

“In so many families, both parents are working, and they can make the bed, maybe vacuum the house once a week, and that’s about it,” she says. “They’re overwhelmed.”

That’s one of the reasons Coopersmith — who previously lived in Belchertown and has also worked in the hotel business and in health insurance service and sales — likes her job. She enjoys helping people declutter their homes and find a little peace of mind.

“This job really is about helping people make those decisions that will make their lives a little easier,” she says.

Coopersmith and another professional organizer, Jill Bromberg of Montague, say they’ve worked with a variety of clients over the years. Some are older people or couples who are looking to move to a smaller place, but others come from many walks of life and have different problems they’re trying to solve.

“That’s one of the things that’s most interesting about the job,” says Bromberg, who used to work with people with special needs and started her organizing business in 2012. “I think what we [organizers] can give is an objective perspective. I can guide people to making decisions on what they want to keep and what they can let go of. And I get a lot of satisfaction on making their lives a little more manageable.”

One big headache for a lot of people, Bromberg says, is clothing.

“It has become so easy to shop online, and then you have these cheap fashion trends that are constantly changing, so things tend to pile up and just get added to the closet,” says Bromberg, whose business is called Serenity Home Organizing and Move Management. “It’s easy to find yourself with too much.”

That’s especially true this time of year, Bromberg notes, with clothing a popular gift idea for many people. She recommends that people practice a “one in, one out” rule: If you get, say, a new sweater for Christmas or Hanukkah (or on some other occasion), think about giving an older one away to charity, or to a friend or work colleague.

One could take the same approach for books. If you’re adding to your collection, take a bunch of older titles that you haven’t read in a long time (or maybe ever) and take them to a used book store for sale, or donate them to a book drop or “Free Little Library” in your neighborhood.

“I always tell people to take pictures of some of these things they’re giving away, so they have a reference if they maybe want to find that book or item again,” says Bromberg.

For professional organizers like Bromberg and Coopersmith, each decluttering or organizing job begins with an initial meeting with clients to assess their needs, get to know them a bit, and figure out a plan for action. Sometimes a job can take place over a long period. Coopersmith, for instance, says she has been working off and on for several months with a couple who have run a farm and business in Conway for many years and now have begun to downsize their affairs.

On the other hand, Alex Milne — an independent scientist and researcher in Northampton who works with a variety of clients in bioacoustics, physical acoustics, wireless spectrum management and other technical fields — got in touch with Coopersmith to help organize his equipment. They met just twice, he says, but Coopersmith not only helped him get better organized: She showed considerable sensitivity and understanding in grasping the basics of what he did and what equipment he needed to keep, he adds.

“I really found Kira to be an exceptionally compassionate human being,” says Milne. “I felt like I was becoming trapped with all these work items that were kind of overwhelming my home life … she learned about [the equipment], which she hadn’t seen before, and made good recommendations about handling it.”

Coopersmith helped Milne organize his equipment by application: storing tools together that would be used for similar operations. For instance, Milne later stored together in one drawer all the items he needs to measure, form, cut or shape small thin metals into structures or components (with some exceptions).

“She brought a level of sophistication to this that was really impressive,” said Milne. “This wasn’t something I’d been able to do on my own, but now I feel I’m in a better position for managing my stuff in the future.”

For her part, Coopersmith says a big part of her job is to figure out which items her clients are emotionally attached to — a family heirloom, say — and which they might be persuaded to part with. “It’s not up to me to tell people what they should or shouldn’t keep, though I’ll clearly make recommendations,” she says. “If someone is super-attached to something — clothing or something they inherited from a parent — we’ll talk that through.”

Other tricks of the trade

Another bugaboo for many people is paper. “I’m amazed at how many people don’t have a basic filing system,” says Coopersmith, who works primarily with residential clients but has also helped small businesses improve their filing systems and overall paper management.

“It is so easy to get buried by paper,” she says. “That’s something a fair number of people need help with — keeping and filing the important stuff in an organized way and learning to get rid of the junk quickly.”

Wendy Sibbison of Greenfield, a retired lawyer, wanted a space in her home where she could write a book. She had a room in mind on her top floor, but, unfortunately, that spot “had become a dumping ground for years for paper and old files and who knows what else,” she says. “I just couldn’t deal with cleaning it out myself.”

Sibbison previously had paid her adult daughter, who lives in Philadelphia, to help her declutter her home about four years ago and felt she couldn’t ask her for help again. So through the internet, she found Coopersmith’s business, called “Sensible Sort,” and hired her to tackle the mess in the third-floor room.

“It was perfect,” says Sibbison. “I never felt rushed or upset [in getting rid of things], I had fun chatting with her, and, in the end, she took away 12 boxes of paper and other stuff.”

That’s another service organizers such as Coopersmith and Bromberg provide: physically transporting excess material to a recycling center, a charity or some other destination of a client’s choice. Bromberg says she’ll always do that for elderly clients or those with physical limitations, but it’s also helpful for others.

“It can be easy to put things in the back of your car and then somehow not get around to actually getting rid of something,” says Bromberg. “Clutter is often postponed decision-making, so if I can help people take that final step, I’ll do it.”

And though this year’s big gift-giving season may already be past, Bromberg notes that in giving gifts in general, a future plan to reduce clutter — or at least keep it in check — is to rely less on physical items. Give someone a gift certificate to a restaurant or a concert, she suggests, or arrange for airline tickets for a vacation.

“We can all use less stuff and less clutter in our lives,” she adds. “It’s just another way to simplify things and make life less stressful.”

Steve Pfarrer can be reached at spfarrer@gazettenet.com.