Are you seeking a mortgage and wondering whether an Adjustable Rate Mortage (ARM) might be right for you? The following article from Apartment Therapy outlines three cases wherein an ARM might just make sense, and save you money. If you are seeking a mortgage, that likely means you are working with a local realtor. Any good realtor, such as our group at Maple and Main Realty in Northampton, MA, will be able to direct you to local banks and/or mortgage brokers. A lender or mortgage broker will be able to speak to about which products are best for you, given your particular situation - both financial and otherwise. Read on to see if, perhaps, an ARM might be right for you. However, please be sure to speak with an expert who knows your local market before making any decisions to do so! 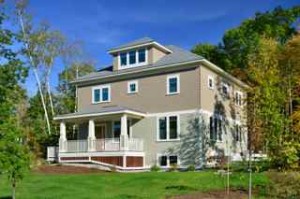 An overwhelming majority of homebuyers opt for fixed-rate mortgages. The terms of these loans offer all the warm and fuzzy feelings that come with a long-term, stable relationship. Go with a 30-year fixed rate and your mortgage payment next month will be the same as it will be in 2049, which makes budgeting super-duper predictable.

Already popular with many first-time homebuyers, fixed-rate mortgages solidified themselves as the darling of the mortgage industry following the housing crisis. Most people thought adjustable-rate mortgages (ARMs) were just a bad idea. Borrowers turned away from ARMs, fearing that once the rates reset, it could be difficult to keep up with housing payments, and thus put them at risk of foreclosures.

But adjustable-rate mortgages seem to be making a comeback. While they still are risky for a long-term investment, they have more safeguards in place than they did prior to the housing market crash, like how much and how fast a mortgage rate can adjust.

Here’s what the numbers tell us: In May 2019, adjustable-rate mortgages only made up 6.7 percent of new home loans, according to Ellie Mae, a software company that processes more than a third of the mortgages in the United States. But in December 2018, ARMs seemed to be mounting a comeback, making up 9.2 percent of new mortgages—the highest since Ellie Mae began tracking the data in 2011.

The biggest misconception about ARMs? That they should never, ever be used. In fact, there are circumstances when finance and mortgage experts say adjustable-rate mortgages actually make more sense a fixed-rate.

“People should not be afraid of an adjustable-rate loan,” says Melissa Cohn, executive vice president at Family First Funding LLC, based in New York City, who favors seven-year ARMs and has one on her own home. “Historically adjustable rates have always been lower than a 30-year fixed rate and can be a great money saver.”

Recognizing that homebuyers have unique financial situations, we asked mortgage lenders when it makes sense to go with an adjustable-rate mortgage. Here, three situations in which they’d recommend an ARM.

But just a reminder before we delve into the scenarios : It’s a good idea to talk all this over with a home lending advisor, says Shelby McDaniels, channel director for corporate home lending with Chase Home Lending.

“Everyone’s situation is different and there is not a one-size-fits-all loan,” McDaniels says.

First, an explainer on how ARMs work: The title of the loan lets you know when the interest rate can reset. So, if you get a 5/1 ARM, that 5/1 means the loan’s lower introductory rate will last for five years, and, after that, it’s subject to adjusting on an annual basis, Holden Lewis, NerdWallet‘s home expert explains.

“So if you get a 5/1 ARM, the safest course is to do so if you expect to sell the home within seven years or so.”

If you’re buying your forever home, you could be subject to ever-increasing interest rates after the introductory period ends—unless you refinance, Lewis says.

Piggybacking on this, if you are buying a starter home and will want to upgrade within five years, an ARM may be a good fit.

Ad by Capital One

Many people don’t consider their actual circumstances and take a fixed rate without giving thought to an ARM, Cohn says. “If you are a first-time homebuyer, newly married, growing a family—those are all reasons in my eyes to take an ARM as your housing needs will change as you go through life.”

Another great reason? You’re starting your career in an expensive city where rent is consistently going up, but you don’t plan on living there in your next chapter of life. In fact, the mortgage are more popular in high cost metro areas like San Jose, California.

“An interest-only option can make ARMs even more attractive for those who are in higher cost-of-living cities on a temporary basis,” says Lauren Anastasio, Certified Financial Planner at SoFi, a personal finance company. “An interest-only ARM typically results in the lowest possible monthly payment during the fixed-rate period and can be a great way for someone to lock-in their monthly housing cost in a location where rental costs tend to increase each year.”

Adjustable-rate mortgages are a great option in a low or declining interest rate environment, explains Riley Adams, a CPA and senior financial analyst who runs the personal finance blog Young and the Invested. Typically, ARMs anchor to some publicly-available interest rate benchmark (such as LIBOR, Fed Funds rate, prime rate, etc.) and add a defined number of basis points to the overall rate offered to you under the ARM. If your ARM adjusts way higher than what you were paying, you can refinance to another ARM or a fixed-rate mortgage—whichever option saves you the most money. (Though sometimes refinancing can be out of the question if housing prices drop greatly—one of the problems that happened during the 2008 housing crisis)

“Because we have been in a low-rate environment for an extended period of time and this looks likely to continue, going after this lower interest rate would make economic sense due to the interest cost savings,” Adams says.

On his previous mortgage, which he took out in July 2011, he went with a 30-year fixed rate and regrets the decision.

“Had I opted for the 5/1 ARM, I would have paid considerably less in interest and ended up with a lower rate were I to refinance,” he says.

3. You plan on paying off your mortgage quickly

An ARM could be a good fit if you plan on paying off the mortgage before the rate adjusts, says Kristopher Barros, marketing strategist at Embrace Home Loans in Middleton, Rhode Island.

“That is a less common scenario for a typical homeowner, but still a good reason to take advantage of the lower rates typically associated with an ARM,” Barros says.

A final note: If you are considering an ARM, be sure to comb over the terms of the fixed period. Most common are 3, 5, 7, and 10 year fixed-period ARMs, says Andy Harris, president of Vantage Mortgage Group, Inc. and member of the Association of Independent Mortgage Experts (AIME). Three-year ARMs are less common and more risky with the unknowns, making the longer-term initial fixed-rate period more attractive, he explains. But, the longer the fixed period, the higher the interest rate generally.

Decisions, decisions! (But, again, before deciding, talk to a home lending advisor about your situation, as McDaniels recommends.)