When we were planning our move to Northampton in 2006, hotel options included The Autumn Inn, The Hotel Northampton, or a chain hotel out on Route 9 in Hadley. The Hotel Northampton was expensive, the Autumn Inn was dark and depressing, and we didn't want to stay on Route 9. That was 13 years ago, and the options haven't increased by much. There are more chain hotels on Conz St, but, until now, there were no cozy, clean, attractive and affordable options right in Northampton. Enter The Ellery! The Autumn Inn has received a low key makeover, and the results are fantastic! Check out the following piece from the Daily Hampshire Gazette.

A new season for the Autumn Inn: The Ellery 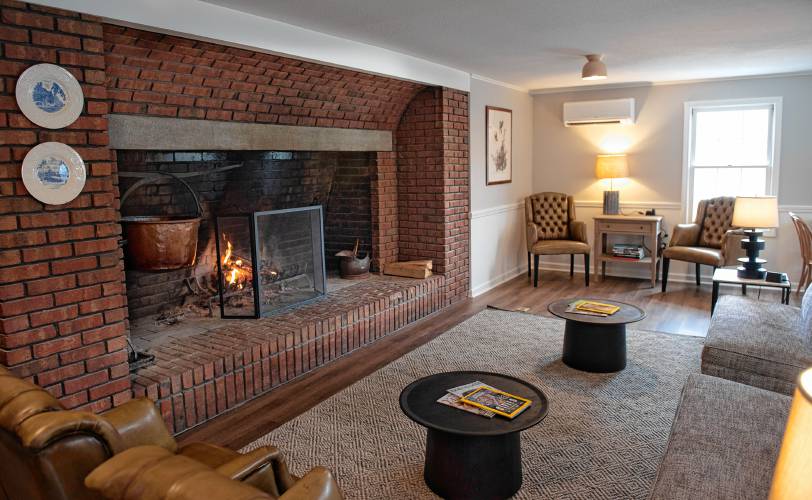 The owners, both preservationists, updated the lobby without touching the room’s massive hearth.

In recent years, the Autumn Inn on Elm Street, a Northampton visitor staple since it opened in 1967, had started to look its age. Online reviewers of the inn had noticed, saying things like “seen better days,” “sad,” and “tired,” and “smells of… feet.”

Enter Bob Thomas and Dierdre Savage, owners of Saltaire Properties, who purchased the inn in 2018 from Atwood Drive LLC, an affiliate of the Hampshire Hospitality Group for $2.25 million. Atwood Drive had held the property since 2001.

Developers of mid-sized, independent New England hotels and inns, the Saltaire team had wanted to buy a property in Northampton for a while, admiring its history and culture. The team’s tagline is “Bringing new life to forgotten hotels,” which means, essentially: keeping the good while updating the old — and making everything a bit more delightful and modern for guests. Thomas holds a master’s degree in historic preservation and Savage has one in architectural preservation. “We’re always interested in the ugly and the unloved buildings,” said Thomas. “The idea of historic preservation is, fundamentally: Don’t think it’s obsolete, there’s actually a use for that building. Save stuff. It’s not just an architecture thing, it’s also an environmental thing, not to throw a building away.”

This meant a deep, but not structural, makeover of the Dutch colonial hotel, which is now called The Ellery, named for William Ellery Channing, a transcendentalist poet who went to school in Northampton. The renovation spanned the 32 guest rooms, a lobby, lounge area, small commercial kitchen, and the exterior. “We always want the design to start with the architecture,” said Thomas. “It’s got to inhabit the building appropriately. This is a neo-colonial building. So it should be kind of colonial, but also modern.”

Interestingly, the original owners also intended a mix. A 1967 Gazette article stated, “…plans for the inn call for an exterior resembling a fine old residence, but the interior will be ultra-modern, including color television in every unit and wall-to-wall carpeting.”

A different 1967 Gazette article, written after the opening, said the inn was “decorated throughout in tones of coppery orange, gold and leaf green.” Those hues had long since faded, though, so the Saltaire team replaced worn red carpeting with soft, mid-tone gray carpet; painted dingy walls with fresh grays and whites; transformed the lobby floor with durable, wood-look planks; swapped out lighting fixtures; and created a design scheme that carried through the rooms. 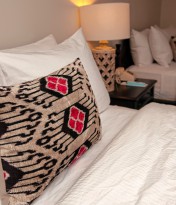 Plus, the HVAC system was completely overhauled, which meant being able to remove bulky air conditioners from the windows and lowering astronomical heating bills generated by the old baseboard heaters. The building was brought up to current fire code, and the kitchen was brought up to code, too.

This work was done with the help of their contractor, plus Carrie Thomas, an interior designer married to Bob Thomas, who designs for Saltaire projects and private clients. The aim was to have the rooms feel “serene, dignified, and peaceful,” said Bob Thomas. Each has a single, large piece of art — framed block prints by designer John Robshaw, Turkish throw pillows, crisp white bedding, and black wood beds. The mattresses have been selected for comfort. “We sell sleep, at the end of the day,” said Thomas. Two items salvaged from the past were the wood framed mirrors and cast iron tubs in each room. They also didn’t touch the massive, 1967 hearth in the lobby’s lounge area, which still exudes cozy warmth.

Outside got plenty of sprucing too. Though they had planned to keep the pool, they soon learned it “leaked like a sieve,” and also haunted Thomas as a potential danger for neighborhood kids. They filled it in and now have a rolling lawn, perfect for special events and warm weather lounging. “I’m going to get the best croquet set I can find,” said Thomas.

Connecting to the past and to place

Devoted to the original intention of the building, they replaced plastic shutters with “architecturally correct shutters,” said Thomas. Real gas lanterns will flicker outside. Copper gutters are soon to be installed. “The idea was to take what the building aspired to be originally and make it more authentically that,” said Thomas.

There was also a commitment to keeping the hotel firmly grounded in a sense of place. “We love giving people an experience that allows them to truly feel they’re in the community that they’re visiting,” said Savage. To that end, the first thing they wanted to add was a replica of Thomas Cole’s 1836 painting of the Connecticut River, called “View from Mount Holyoke, Northampton, Massachusetts, after a Thunderstorm — The Oxbow.”

“It tells you about your surroundings,” said Thomas. There are also framed posters from shows at The Calvin, a photo gallery of famous Smith College alumna, and a bookshelf that Thomas stocked with books by Smith authors — think: “Orange is the New Black” and “Gifts from the Sea” — plus other writers who had a connection to Northampton.

The desire to connect the hotel to the city carried through to their business. “We really like community partnerships,” said Thomas. Woodstar’s bakery will provide the batter for their morning scones. And Florence Savings Bank helped fund the venture. “They’ve been awesome,” said Savage. “We work with community lenders so that we, hand-in-hand, are investing in the community. No Bank of America for me.” She also said that various city departments and boards in Northampton were notably supportive of the project. “It was actually a pleasant experience,” she said. “We are very grateful for that.”

Back in 1967, city board had, in fact, opposed the creation of an inn at 259 Elm Street in the first place — four years after striking down a bid to create an 80-unit high-rise on the lot. From a May 1967 Gazette: “The Northampton Board of Appeals will have a public hearing in the city council rooms tonight on the appeal of William H. Ormond Jr., objecting to construction of a 32-unit Autumn Inn on Elm St. Ormond contends the facility is a motel, not an inn, and that it would be in violation of the city’s Residence C zoning ordinance.” Regardless, the inn opened in October of that year.

Savage and Thomas have been business partners for more than 10 years — starting their career in housing and then gravitating toward hotels because it was more about people and didn’t have a finite end. “It’s not like it’s just built and it’s over, said Thomas. “It kind of evolves over time.” Properties they’ve developed include The Shire Woodstock and The Stowehof, both in Vermont, and the Harbor Hotel in Provincetown. The two developers share all aspects of the business — though Savage, who has a background in commercial real estate finance, handles the banks. “I’m not just sitting there with a green visor on, though,” said Savage.

“We really both enjoy the design part, the relationship part and the operations part,” said Thomas. “What does it feel like to be a guest here? What’s the music? How are you greeted? We share those things.”

Savage lives in Gloucester and Thomas outside of Boston, but they plan to stay involved with the big picture. A management company hired by Saltaire will operate the hotel day-to-day, checking people in, hiring the employees, dealing with laundry, etc. The company also sets the rates — which vary by day and date. A quick search shows that a weekend in mid-June costs anywhere from $215-$279 a night, depending on the room.

As for the future, the team plans to thoughtfully buy and restore more hand-selected properties. “There’s no recipe for what we do, but we’re pretty good at identifying what we see as terrific opportunities,” said Savage. Their goals beyond The Ellery are twofold: “To put together a portfolio of properties that would offer people a tour of New England — and build a healthy business,” Savage said. “We’re in this for the long term.” Also, she adds, laughing: “I love new deals. It’s fun, it’s exciting.”

Visitors to The Ellery might say the same thing about that new croquet set, as they click balls across the hotel’s lawn in the New England sun.