It's so much fun to happen upon articles in well known publications, touting the many highlights of our fair city of Northampton. Last week, my mother sent me a link to this article in Yankee Magazine, which muses about whether one *could* live here. We say yes! Read on to remind yourselves of the many reasons why you live here, and love it!

Northampton, Massachusetts | Could You Live Here?

When temperatures dip into the single digits, the college town of Northampton, Massachusetts, turns up the heat. 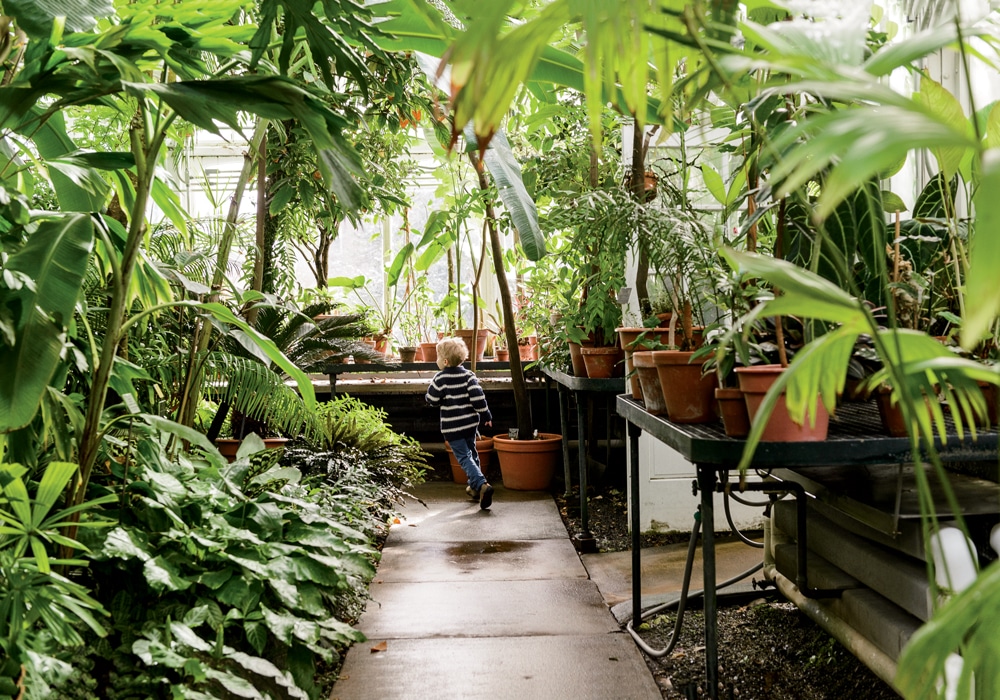 A young visitor lets off some steam in the Palm House—aka “the Jungle Room”—at Smith College’s Lyman Plant House and Conservatory.

On the coldest day of the winter, which is soon to lead into the coldest night, we head south from New Hampshire in search of personal climate change. Seventy miles later, we check into the Hotel Northampton, climb the hill that rises toward Smith College, and spiral up an icy-cold staircase to heaven. Or, more specifically, East Heaven. As in, Hot Tubs.

Up here in the clouds (actually, the rooftop), steam billows from a bubbling wooden cauldron that sits high over Northampton. Vapor curls into the dark, frigid air. Snow is falling, the temps hovering around 8 degrees. A pale, misty moon is barely visible above the private enclosure that surrounds our percolating pool. My hair stiffens and freezes, and I couldn’t be happier … or warmer. The air feels sharp enough to shatter—and I don’t care. Which is probably what any number of East Heaven customers have felt since 1981, when Ken Shapiro and Scott Nickerson opened this Japanese-style bathhouse. “I took more hot tubs than showers growing up,” quips Shapiro’s son, Logan, who now helps run the business: four indoor tubs and four outdoor ones, plus a spa. 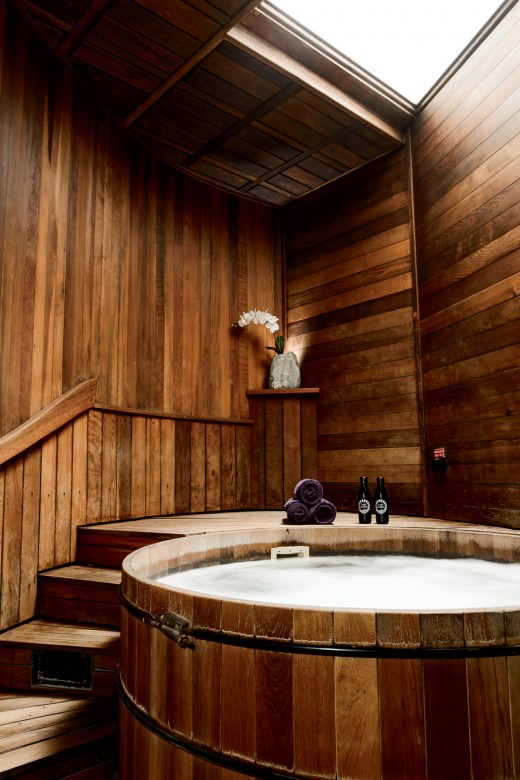 One of the eight hot tubs at East Heaven.

Oddly, the thermostat seems to be rising all over town—cranking up even to, one might say, a tropical intensity. Blocks away from East Heaven’s 104-degree tubs, in the heart of the Smith College campus, a Victorian confection sits amid the swirling snow: It’s the 19th-century Lyman Plant House and Conservatory, shaking off winter with a humid canopy of cacao, banana, and rubber trees in its kid-magnet Palm House, nicknamed “the Jungle Room.” Close by, the transcendent Hungry Ghost Bread, effectively a bakery sauna, emits clouds of yeasty moisture whenever a customer steps inside. Cozy bookstores meld heat, escapism, and—in the case of Raven Used Books—classical music to conjure a mini vacation from the chill. And we’re just warming up. 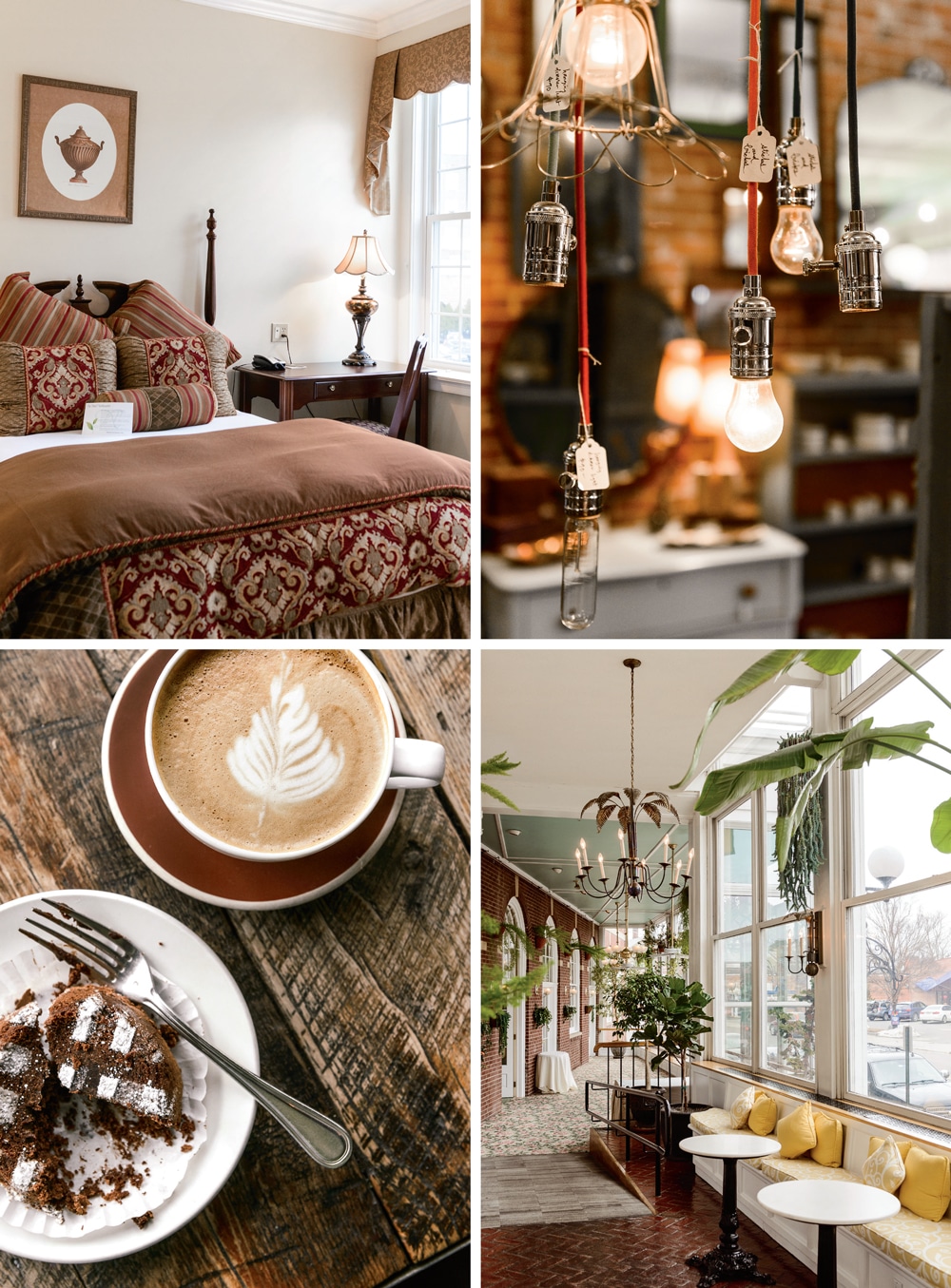 Clockwise from top left: Comfy digs in the Hotel Northampton’s newer Gothic Garden building; one-of-a-kind lighting fixtures at custom furniture shop Sticks & Bricks; the atrium at the Hotel Northampton, whose guests have included David Bowie and the Dalai Lama; an artful latte alongside Kahlúa fallen chocolate soufflé at the Roost.

This vibrant Western Massachusetts town is planted in the fertile Pioneer Valley, bordered by farmland, traversed by the Connecticut River, and surrounded by a constellation of top-notch schools—specifically, the famed Five College Consortium (Smith, Mount Holyoke, Amherst, Hampshire, and UMass Amherst). Anchoring and overlooking Northampton is Smith College, founded in 1871, its pretty campus well within walking distance of a downtown brimming with shops and cafés, many decades old. Smith alums who wandered these streets include Gloria Steinem, Sylvia Plath, and Julia Child. Calvin Coolidge was mayor here, from 1910 to 1911, before becoming our 30th president in 1923. One local writer observes: “We’re in the country, but it’s cultured. We’ve got fantastic libraries and a great book culture, but you can also have a yard and be near a forest.” 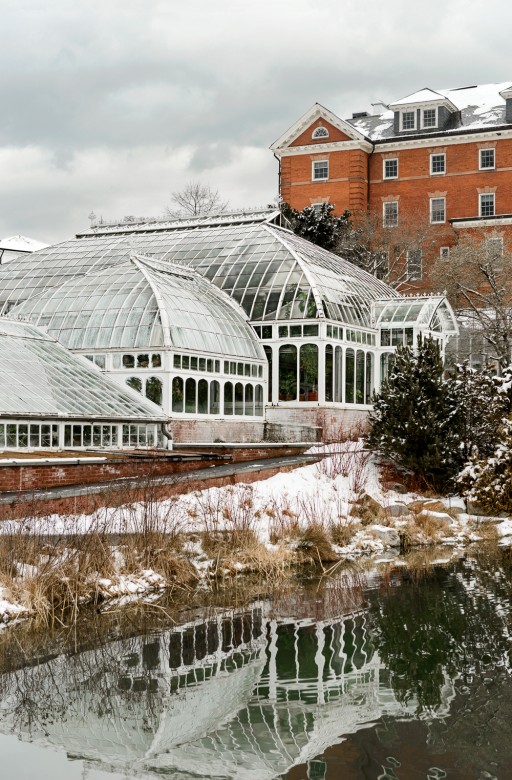 A view of Smith College’s c. 1895 conservatory, which houses 3,000-plus species of plants from around the world.

The café life is exactly what you’d imagine in an energized college town, with a robust mix of students and professor types taking their MacBooks out for a spin and cozying up to lattes. But art lovers can also find inspiration: The Smith College Museum of Art’s impressive collection includes Monet, Picasso, Rodin, Degas, and Cézanne, and a year’s membership brings unlimited admission to high-quality escapism. Locals can volunteer to lead tours at the Lyman Plant House after intensive training in basic botany and the history of the garden, according to a volunteer. Moms and dads troop through the greenhouses with children eager to visit their favorite rooms. “This is mine,” says Langston, a lively 3½-year-old who’s engulfed by giant foliage in the Palm House (although he’s partial to the cacti in the Succulent House, too). “We come here once a month, and he runs through the rain forest,” says his mother, Sally. “I know other people like to come here and be contemplative….” 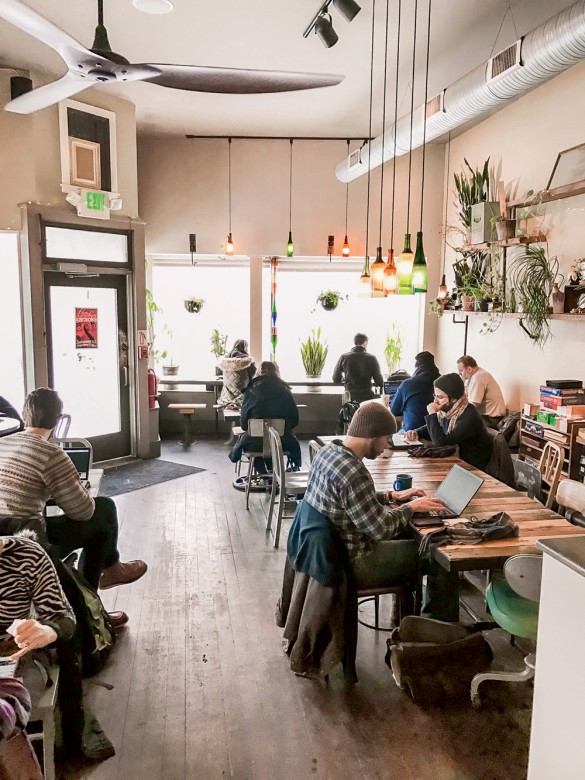 Opened on Market Street in 2011, the Roost caters to a variety of appetites with everything from breakfast sandwiches to milkshakes to wine and beer.

Snow is still pelting down as we slip into the Roost, where steamy windows and wood-plank rusticity meet “Rooster Rolls” stuffed with egg, bacon, avocado, or possibly whipped gorgonzola (making the Food Network very happy and earning its props for “best breakfast between bread”). At Haymarket Café, midway up Main Street, contented vegetarians are still squeezing around the postage stamp–size tables (as they have since 1991), surrounded by eccentric wall art, the air alive with the hiss of espresso in the making. Casual ethnic eateries abound—including Amanouz Café, serving bursts of Moroccan flavor. A sprint through town reveals further options of Indian, Greek, French, Japanese, Thai, Mexican, Italian, and Vietnamese cuisines. But if fresh bread is your holy grail, Hungry Ghost Bread is the destination. “Artisanal” and “wood-fired” are weak words for conveying the crack of this crust, the moist cushion within, and the otherworldliness of a cranberry-maple turnover that somehow fell into our bag. 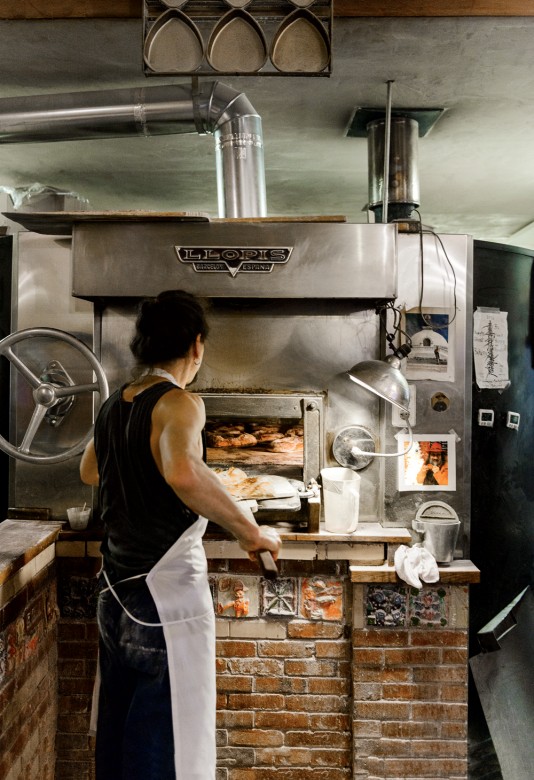 We found plenty of excuses to duck indoors, such as Sticks & Bricks, with its artwork, jewelry, and sleek furniture made from reclaimed materials, and Pinch, offering unusual wall art, ceramics, curated clothing, and airy home decor. Thornes Marketplace packs dozens of stores and eateries under one roof, including Paul and Elizabeth’s, a vegetarian mainstay since 1978. Scattered around Northampton is enough reading material to get anyone through winter—Broadside Bookshop, for instance, lines its walls with quality reads plus smart political stickers—but for hours of browsing, nothing beats descending into the cozy den of Raven Used Books. Abundance spills out of the shelves and onto the floor; “Middle English Texts” sits next to “Arrrrgh!” (pirates). It’s an oasis of calm, and an exploration set to the soundtrack of Handel’s Water Music. 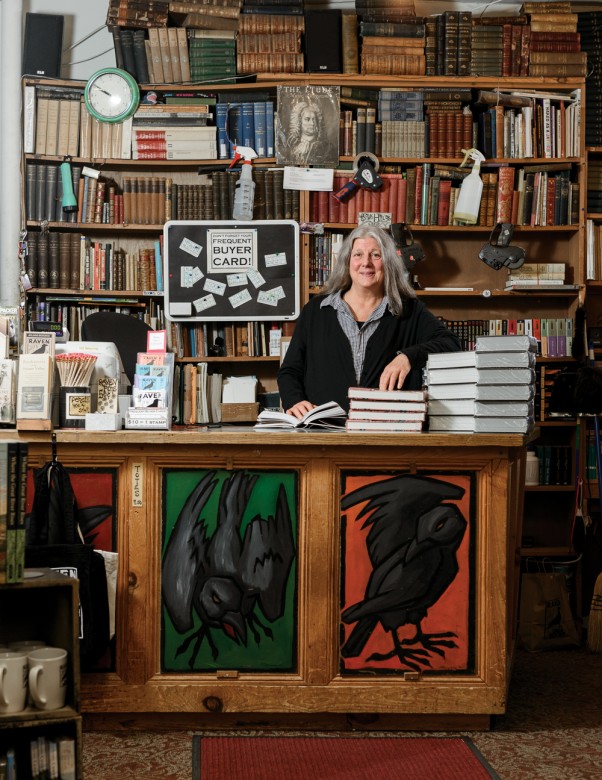 At the time of our visit, a stylish two-bedroom townhouse-style condo in a c. 1900 building once known as the Union Street Jailhouse, offering exposed brick walls and a short walk to downtown, listed at $246,888. A breezy four-bedroom renovated 1950s colonial, with granite kitchen counters and proximity to Childs Park, was selling for $399,000. And a two-bedroom eco-friendly contemporary condo with a rooftop deck, less than a mile from the Smith campus, also listed at $399,000.

Apart from being able to luxuriate at East Heaven (and take a free half-hour tub on your birthday), we barely scratched the surface of Northampton’s local perks. Every type of music and performance venue is represented here, from intimate institutions like the Iron Horse Music Hall to the venerable Academy of Music, the oldest municipally owned theater in the country (c. 1891), which showcases talent ranging from Irish songbird Mary Black to the witty David Sedaris. As for the visual arts scene, it explodes at the twice-yearly Paradise City Arts Festival, an extravaganza of 200-plus top-notch craftspeople and fine artists that’s been dazzling shoppers since 1995.

Just off Main Street, in the center of town, the elegant Hotel Northampton—a member of Historic Hotels of America—is ideally situated for sampling every tropical diversion. And for depths of coziness on a winter’s night, descend into Wiggins Tavern, the hotel’s 1786 tavern (moved from its original site in Hopkinton, New Hampshire), for an incomparably warming Indian pudding.