In our development in Florence, MA, just 2.5 miles from downtown Northampton, MA, it seems that solar panels are going up on yet another neighbor's home on a weekly basis. We started the process of interviewing local solar providers last year, but had to put the project on hold for a variety of reasons. Now we are ready to open this can of worms once again. Luckily, our neighbors have done a lot of research, which they are happy to share. The following article from Apartment Therapy does a nice job of explaining the costs and benefits associated with installing solar panels on ones' home. The good news is that buyers do seem to be willing to pay more for solar power - so you needn't stay in your home long enough to see a direct return on investment.

Can Solar Power Pay Off? One Homeowner Crunches Real Numbers 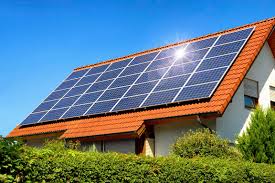 Aside from the obvious benefit of helping the planet, solar power can be pretty enticing to homeowners who are tired of paying an arm and a leg for their electric bill every month. Given that outfitting a home with solar panels comes with considerable costs upfront, though, is doing so practical from a financial standpoint? Can solar power in fact pay off?

For starters, it's worth noting that the benefits—as well as costs—of installing solar (also called photovoltaic) power systems will vary from house to house. This makes sense, right? Your house might be much larger than my house. My house may be in an area where solar power is more readily available and therefore more affordable. The variables go on and on.

In general, however, there are a few universal benefits of installing solar power: it lowers your electric bill, minimizes your carbon footprint and, depending on where you live, it can even bump up your home value.

On the flip side, you'll need to drop a pretty penny upfront in order to buy the equipment and pay for the installation. The big question, of course, is whether the potential savings will outweigh those upfront expenditures—or, more pointedly, whether you'll actually be able to save money (or make money, if the value of your house goes up considerably) should you invest in solar power.

How much does solar power cost to install?

Let's talk numbers, shall we? A solar power system for an average-sized house in the U.S. can run anywhere from $15,000 to $40,000. If those figures give you a serious case of sticker shock, don't fret just yet—many companies allow you to "lease" the equipment, which dramatically reduces your upfront costs. But should you decide to purchase outright, you may qualify for government incentives that cut the cost of the system. In all 50 states, installing a solar power system qualifies the homeowner for the Residential Renewable Energy Tax Credit. This tax incentive allows you to claim a credit of 30 percent of qualified expenditures for your system and, most importantly, helps to shave down the time it would take for your savings to equal out or exceed your initial investment.

If you're the type that likes online calculators, you'll be particularly happy to learn that Google has come up with a handy little number-cruncher to give you an approximation of the costs and savings you can expect with solar in your own home. Called Project Sunroof, the tool relies on high-resolution aerial mapping to calculate your specific roof's solar energy potential. According to Google engineer Carl Elkin, the site "figures out how much sunlight hits your rooftop through the year, taking into account factors like roof orientation, shade from trees and nearby buildings, and local weather patterns."

When I plug my home's address into Project Sunroof, it spits out an aerial thermal image of my street that is, if we're being honest, pretty damn impressive in its detail. The fact that my roof is glowing bright yellow clues me into the fact that sunlight is aplenty, but the site spells it out for me, too.

By their estimate, my roof receives 1,606 hours of usable sunlight per year. Based on 3D modeling of my roof and nearby trees, the site figures I have 564 square feet of roof available to be outfitted with solar panels—and they recommend an 8-kilowatt system, which would cover 40 percent of our household electricity usage.

What does all of this mean for my bottom line and, theoretically, yours? That, yes, a solar power system can pay off.

With the system covering around 40 percent of my household electricity usage, my 20-year benefits of utilizing the system would total $37,000. If the upfront cost of a system after tax incentives amounts to $17,000 and we deduct that from the benefits, the 20-year savings comes out to $20,000. In other words, it would take nine years to pay back that initial investment.

You may be thinking, "Yeah, but this only pays off if I actually stay in the home for nine years." In which case you may be relieved to learn that research conducted by the Department of Energy in 2015 showed that buyers are happy to pay more for homes with solar power systems.

The study, which was cited by The New York Times, revealed that buyers were willing to pay a premium of $15,000 for a home with a solar power system, compared to a similar home without one. The only caveat is that these findings apply to systems that are owned, not leased.

So although there's no hard-and-fast rule for whether or not solar power systems will pay off in every unique situation, they can certainly save you money immediately on your electrical bill whether you buy or lease. And if you have the capital to make the full investment upfront, you could be looking at paying off the system in less than a decade and enjoying sizable savings and a big ROI in the long-term.