Maple and Main Realty was mentioned in an article in the Boston Globe yesterday, August 11th. The article, written by local writer/author Debra Jo Immergut, is about screened-in porch design and function. It focuses on screen porch projects in the Northampton and Pioneer Valley areas, and features local architect, Tim Stokes of Stokes Design/Build.

We are in the process of planning to add a screen porch to our home here in the valley, so this article is timely indeed. How lovely to enjoy the few warm spring/summer months of Western MA, without being pestered by bugs! 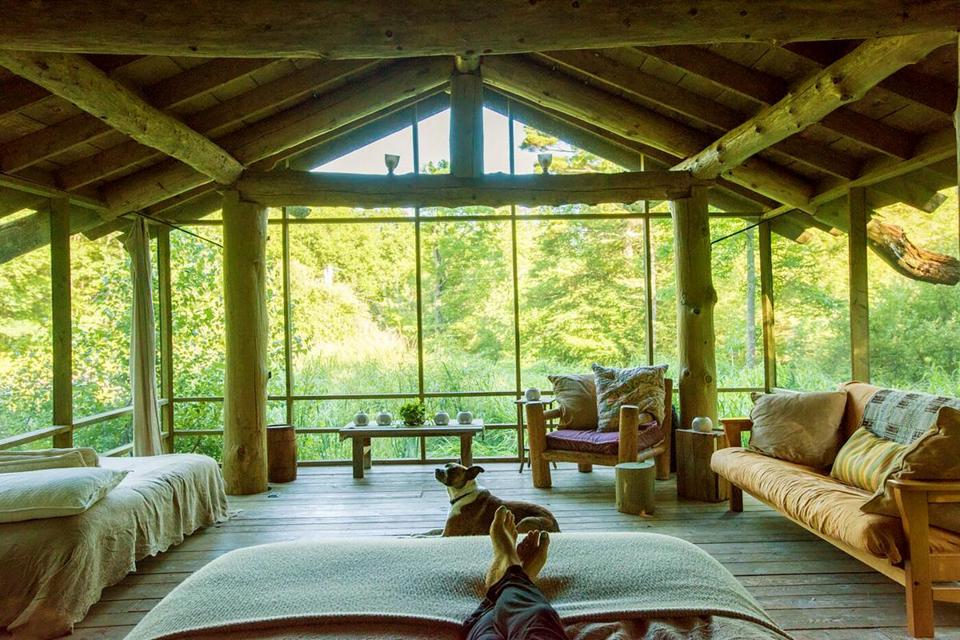 Gayle Kabaker and Peter Kitchell’s dog, Charlie, relaxes in “The Pondhouse,” a screened-in slumber spot on their Western Massachusetts property.

By Debra Jo Immergut GLOBE CORRESPONDENT  AUGUST 11, 2016
Illustrator Gayle Kabaker and artist Peter Kitchell are well-versed in the pleasures of a summer’s snooze on a sleeping porch. They have not one but two screened-in slumber spots on their rolling property in the Western Massachusetts town of Ashfield.

One inviting berth occupies part of a screened dining/sitting area adjacent to their sunny kitchen. A few years ago, Kabaker swapped out the sofa for a twin bed. “It’s a great place to nap,” Kabaker said of the space, which she uses for nearly half the year. “I set it up as soon as I can each spring.But the true star of the property is just out of view, a hundred or so yards down a meandering path. There, a graceful freestanding screened pavilion, built by Kitchell from local hemlock and inspired by Japanese teahouse architecture, overlooks the property’s small pond. Visiting friends and family sometimes overnight in “The Pondhouse,” and Kabaker uses it often as a place to read, nap, and practice yoga. But that’s only when it’s not occupied by the paying guests who book it through the AirBnb website. Kabaker first posted her listing in summer 2012. The Pondhouse is now booked most weekends, and many weekdays, from May through October. Despite the fact that it has no electricity or running water (and the bathroom is up the hill in Kitchell’s studio), “we recently had a mother and her two daughters fly up in a private plane from Georgia just to stay here for 36 hours,” Kabaker said.

In this overstimulated age, the idea of a quiet screened porch certainly has allure — and, after decades in which screened-in spaces were often torn down or enclosed for year-round use, many homeowners are taking another look. Judging on the number of images of the airy structures shared or saved on sites like Pinterest and Houzz, the screened-in room is enjoying a popularity not seen since the early 20th century, when sleeping porches were de rigueur for new homes. Back then, such indoor/outdoor rooms were not simply pleasant spots to catch a summer breeze. Rather, the trend was fueled by the common belief that sleeping in the fresh air was an essential way to ward off tuberculosis.

In 2016, that trend may be coming full circle. This summer has seen a healthy uptick in window-screening sales, said Gregg Terry, marketing director at the Alabama firm Phifer Inc., which supplies the mesh materials to building-supply distributors, home center and hardware retailers, and window manufacturers. Much of that demand has been driven by a healthy housing market, Terry said.

But there’s also a disease that is inspiring builders and renovators to consider screened porches. The Zika virus — and the recognition that controlling insects is a growing health concern — “has been a motivating factor,” said Terry, whose business has an international presence.

Whether motivated by health worries or visions of long, lazy afternoons with a good book and a cold drink, “people do love screened porches,” said real estate agent Julie Held, co-owner and manager of Maple & Main Realty in Northampton. Of course, she added, “It sort of depends on when people are looking at houses; it’s seasonal. It’s really appealing if they’re looking at it in the summer, but in the winter they have a hard time believing it’s ever going to be warm again.” Still, she said, they’re a covetable asset, especially when placed in the right spot for maximum beauty and functionality.

As a renovation project, a screened structure offers a relatively inexpensive way to add usable space to a home. The screened porch is “a really elemental form of shelter,” said architectural designer Timothy Stokes of Stokes Design/Build in Westhampton. “The porch has very simple things it needs to do — just keep the rain off of you and keep the mosquitoes from eating you alive.”

Stokes recently added a screened porch, constructed from cedar and ipe wood, as part of an addition to a client’s home in South Deerfield. By opening up the south side of the home with large expanses of screening, the porch increases air circulation and “acts as a huge lung for the rest of the house.” The clients often end up sleeping in the breezy space, which was designed to maximize views of Mount Sugarloaf, Stokes said. “If they can sleep through that time from 4:30 to 6 a.m. when the birds are really going off, then it’s great,” he joked. 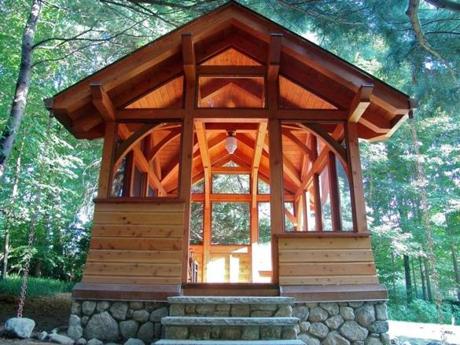 Architect Edrick VanBeuzekom designed this pavilion with an eye toward natural materials.

Tucked into the trees at the top of a slight slope behind a house in suburban Framingham, a freestanding pavilion completed in 2007 by Somerville architect Edrick vanBeuzekom of EvB Design was inspired by Japanese teahouses and traditional New England building techniques. Working with the Claremont, N.H., firmTimberpeg, which specializes in heavy-timber structures, the architect designed it with an eye toward natural materials: its Douglas fir frame is assembled with traditional joinery methods and topped off with a copper roof.

The pavilion’s owners use the multitasking structure for lounging with the Sunday crossword, sleeping on summer nights, and hosting acoustic jam sessions. The pavilion is screened through the summer, but it’s also outfitted with custom-made interchangeable glass and screen panels that extend its usability through much of the year. “If you have all the glass panels in, and you get the lower winter sun in there, it actually warms up pretty well,” vanBeuzekom said. When not in use, panels can be stored in a crawl space reached via a hatch in the floor.

Adding such a feature to one’s property can be fairly inexpensive, the architect said. “I’d do a very simple roof shape and put it on piers, and it would be fairly easy with some basic carpentry skills,” he said. “And, as in any architectural project, the beauty comes with the details.”

Inspired? Here are a few pointers:

Site it right. A porch’s orientation to prevailing light is critical, Stokes said. “Be very aware of the predominant sun angles on your property, so you don’t end up with a very open wall on the south if your intent is to have a shaded, cool area.”

Choose the right screens. Screening is made from a range of materials, including woven wire, polyester, and Fiberglas, so do your homework before you buy. Stokes chose a high-density Fiberglas pet-proof screen for the South Deerfield project: “It’s designed to prevent small bugs like no-see-ums and gnats, and at the same time it’s incredibly strong and can be very tightly stretched with no billowing.”

Cover the floor, too. When Stokes designs a porch feature, he always specifies for screening to be installed under the floor. “People forget to do that, and then they’ve got a big problem because these bugs come right up between the boards.”

Avoid run-off problems. “You don’t want to create any drainage issues on the landscape,” vanBeuzekom said. For the Framingham pavilion, he hung copper rain chains to slow the flow of water onto the ground (and to add an ornamental element).

Furnish it with style. Part of the success of The Pondhouse is due to its simple but luxe accoutrements. Kabaker favors bedding from Pittsfield company Pine Cone Hill for the comfy bed that forms the space’s centerpiece. “In your budget, allow for outdoor furniture that can stand up to the elements — for example, an outdoor sofa with cushions that can be removed and washed,” Stokes advised.

THE PONDHOUSE & THE SLEEPING PORCH 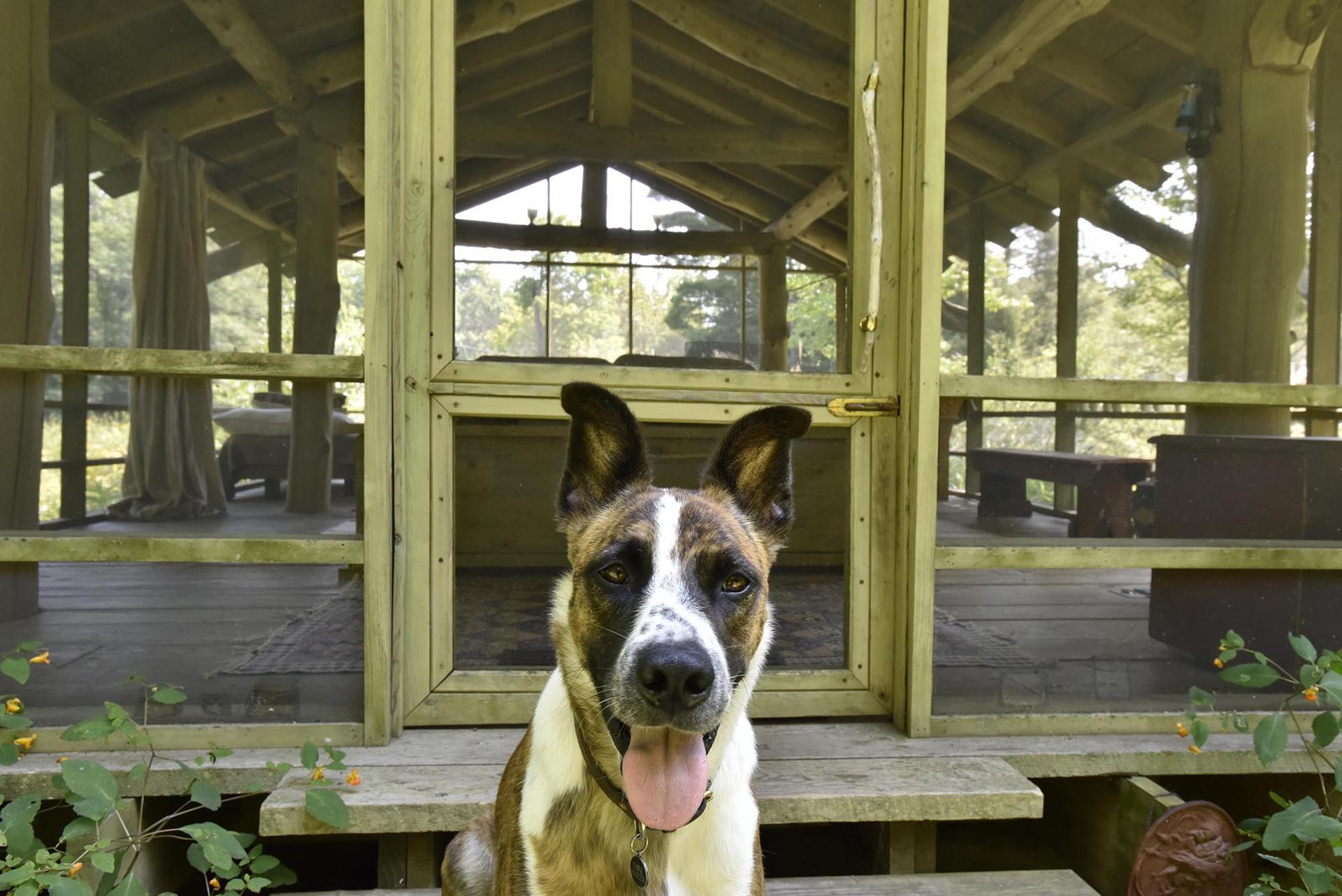 Charlie the dog waits outside The Pondhouse in Ashfield. 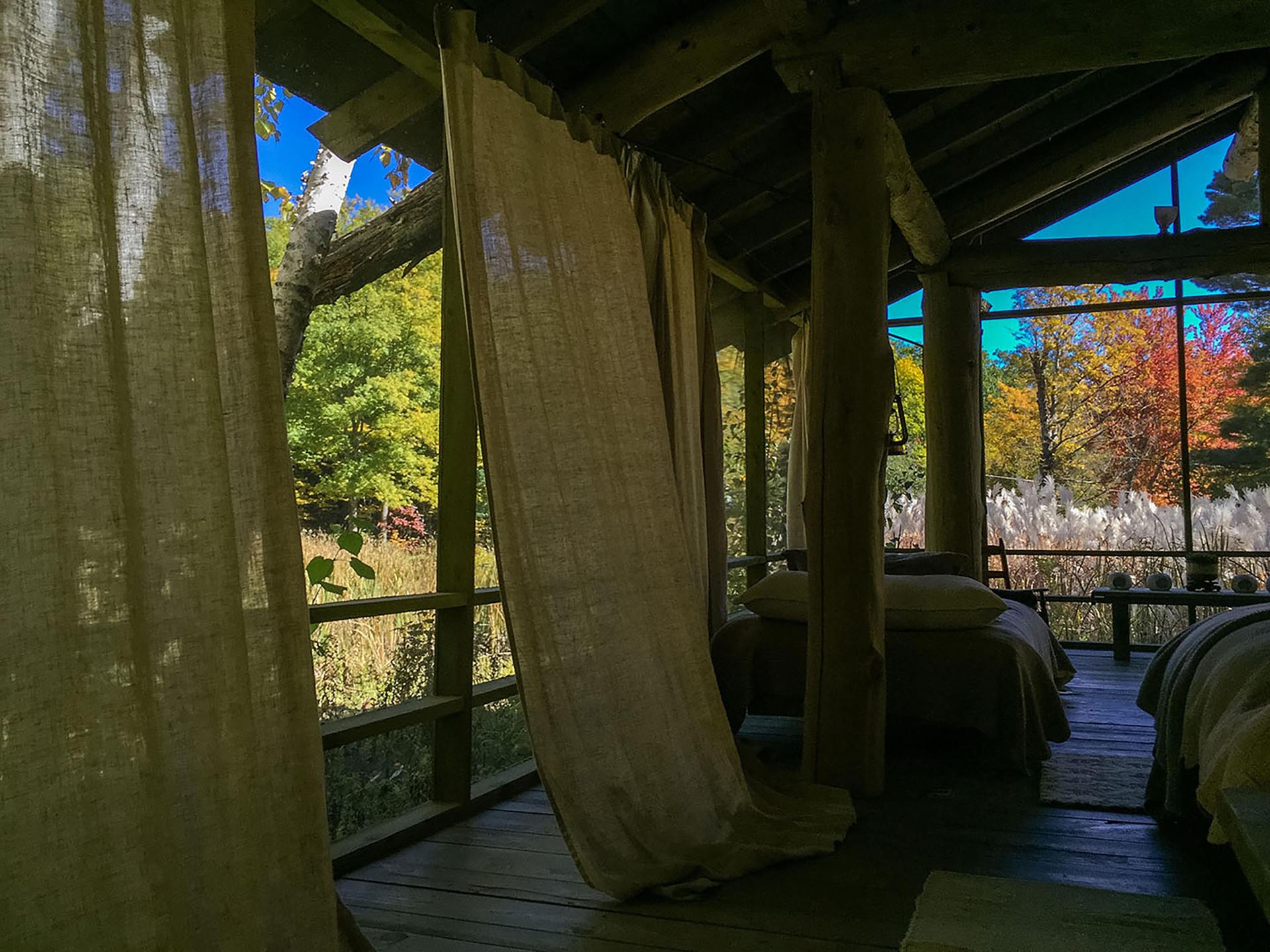 It’s a great place to nap,” Gayle Kabaker said of the space, which she uses for nearly half the year. 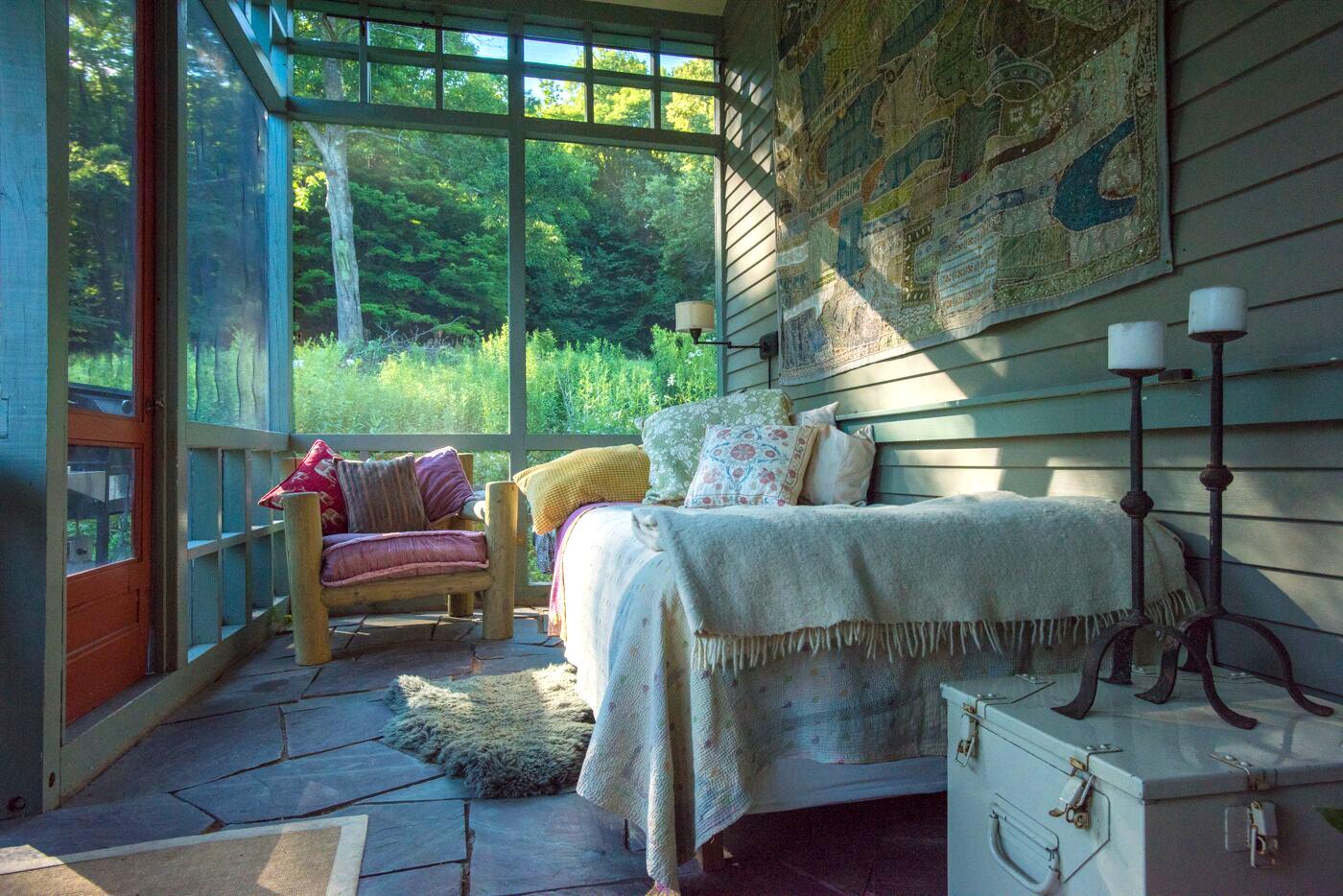 The sleeping porch off Gayle Kabaker and Peter Kitchell's home in Ashfield. 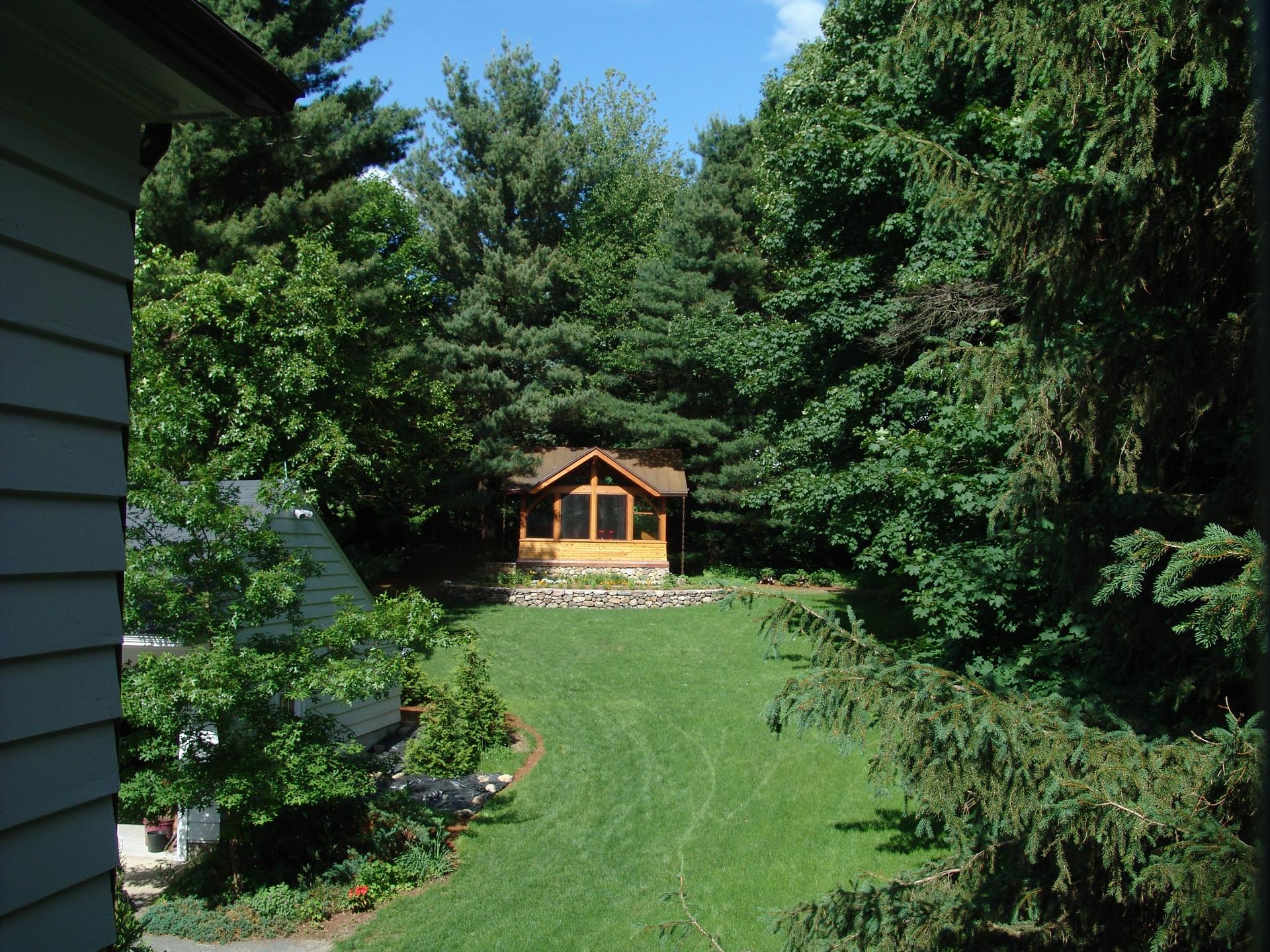 This pavilion is tucked into the trees at the top of a slight slope behind the house. 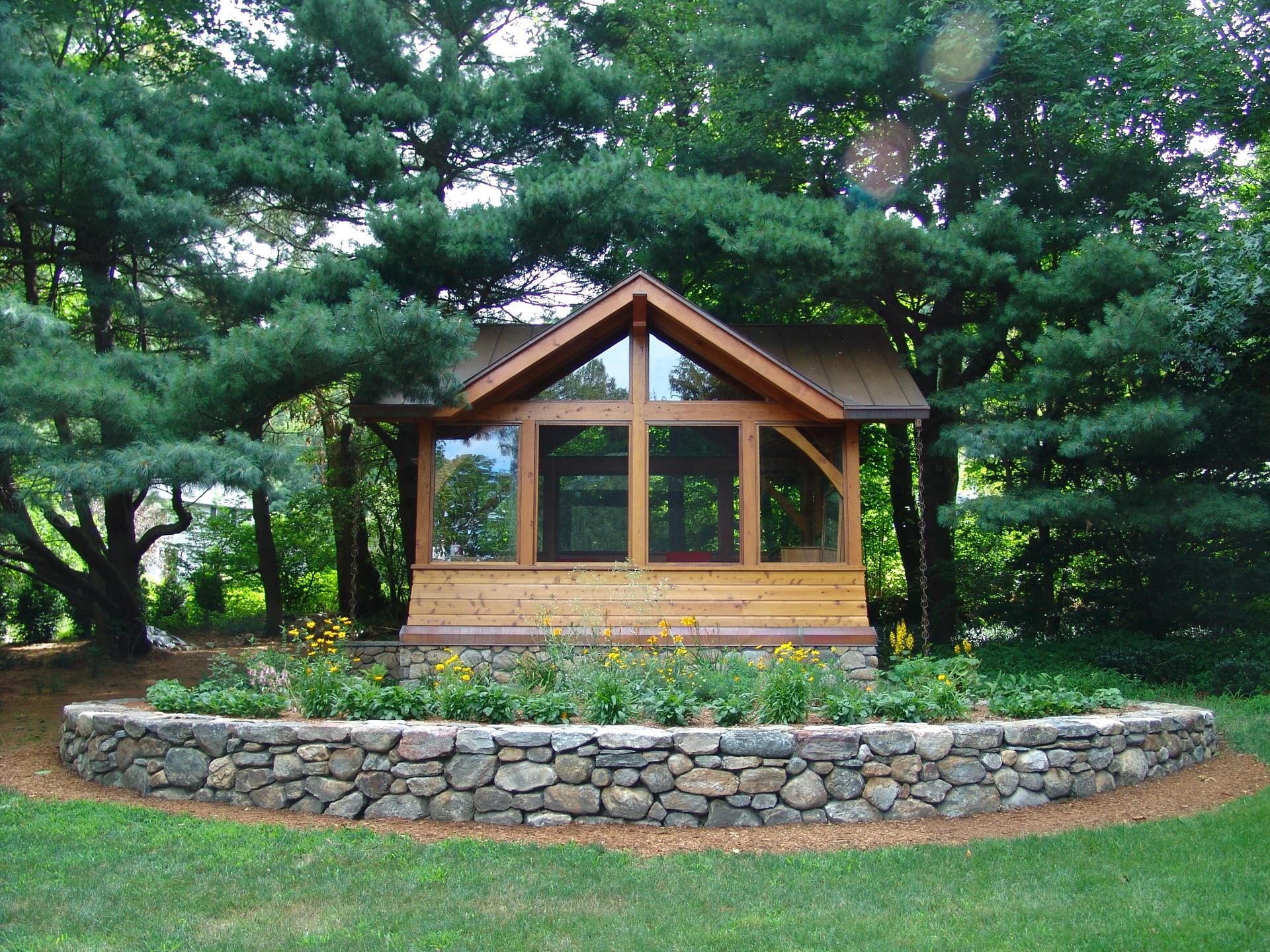 Somerville architect Edrick vanBeuzekom of EvB Design completed it in 2007. 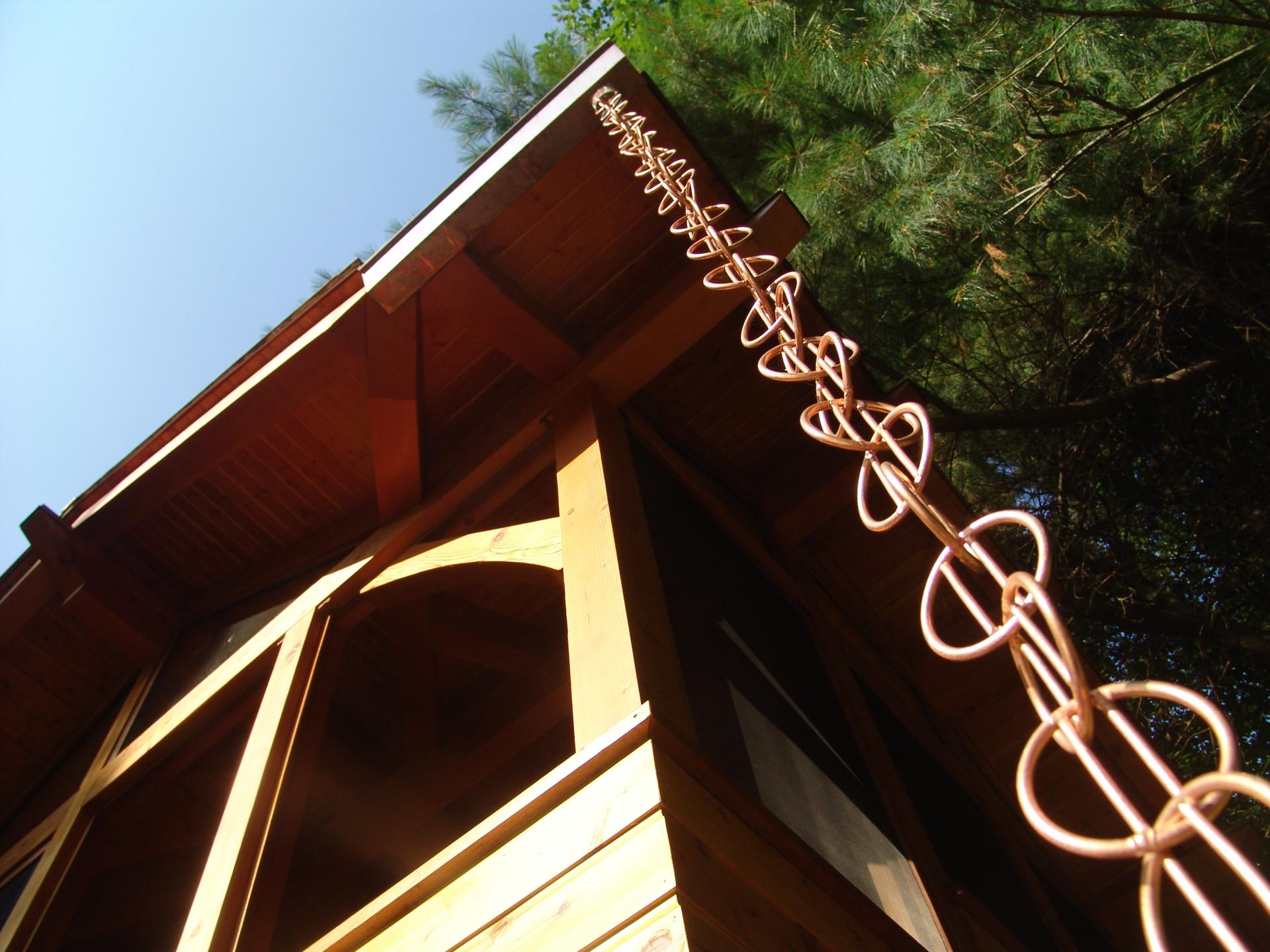 VanBeuzekom hung copper rain chains to slow the flow of water onto the ground (and to add an ornamental element). 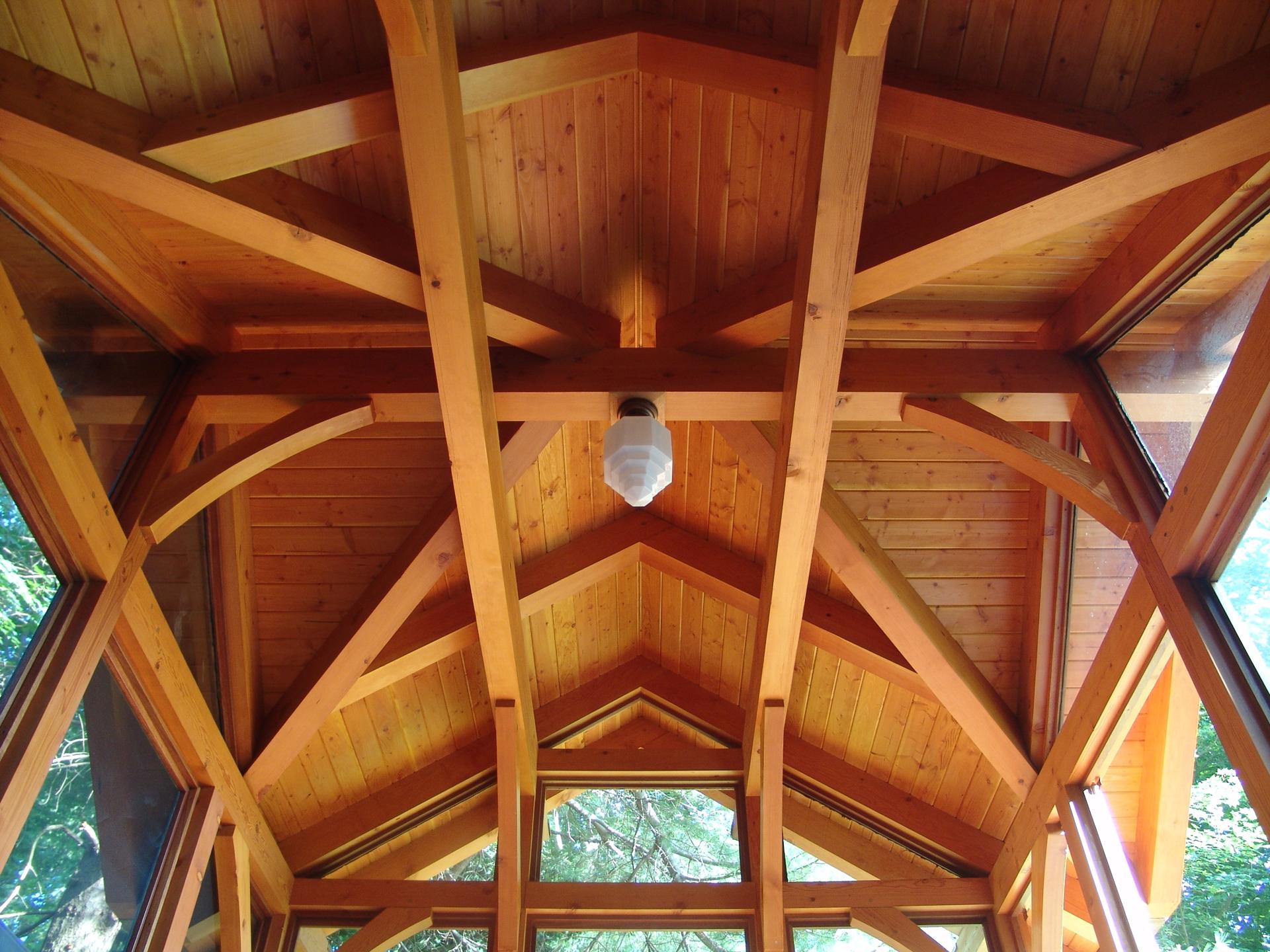 The design was inspired by Japanese teahouses and traditional New England building techniques. 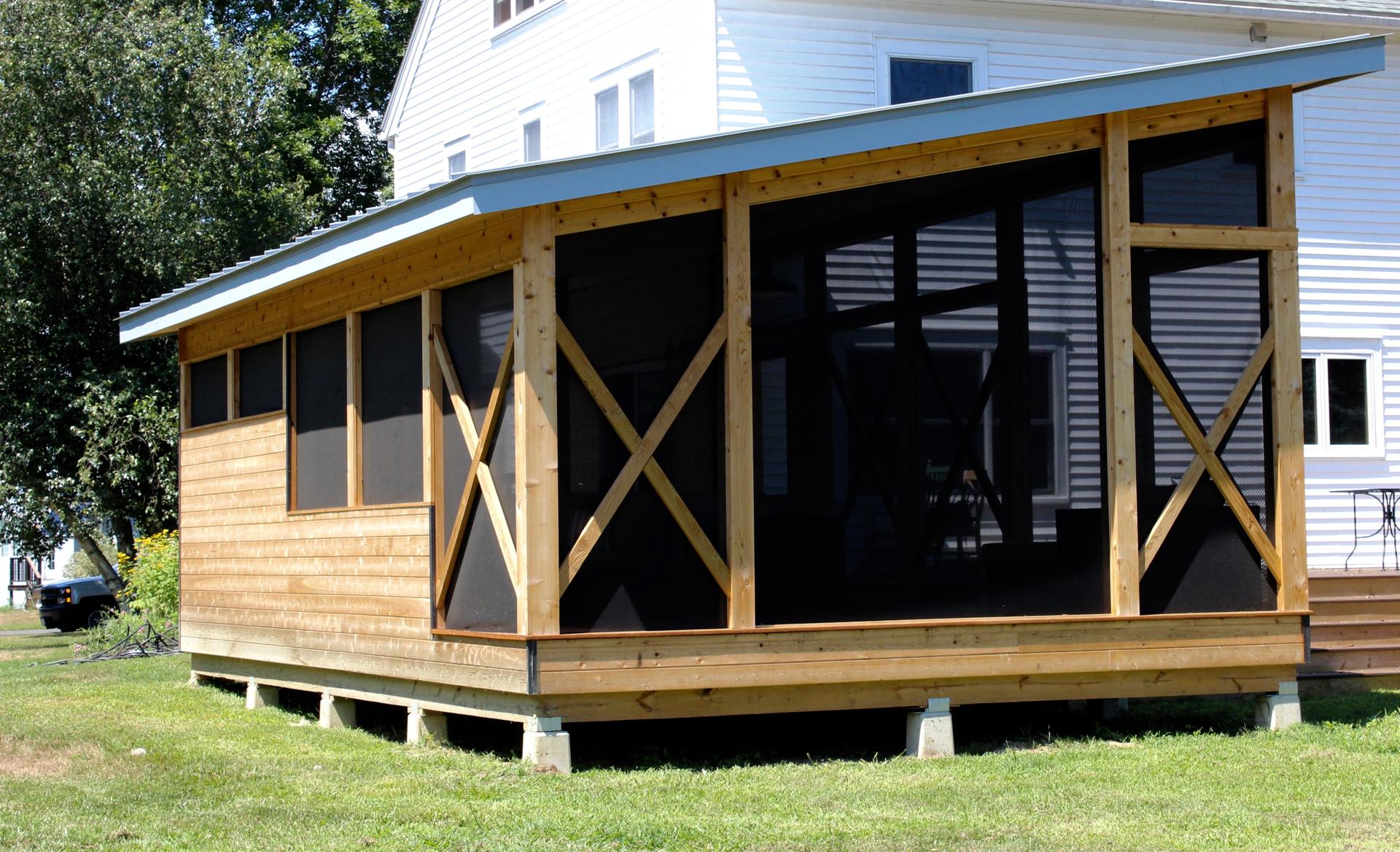 Timothy Stokes of Stokes Design/Build in Westhampton created this addition for a home in South Deerfield. 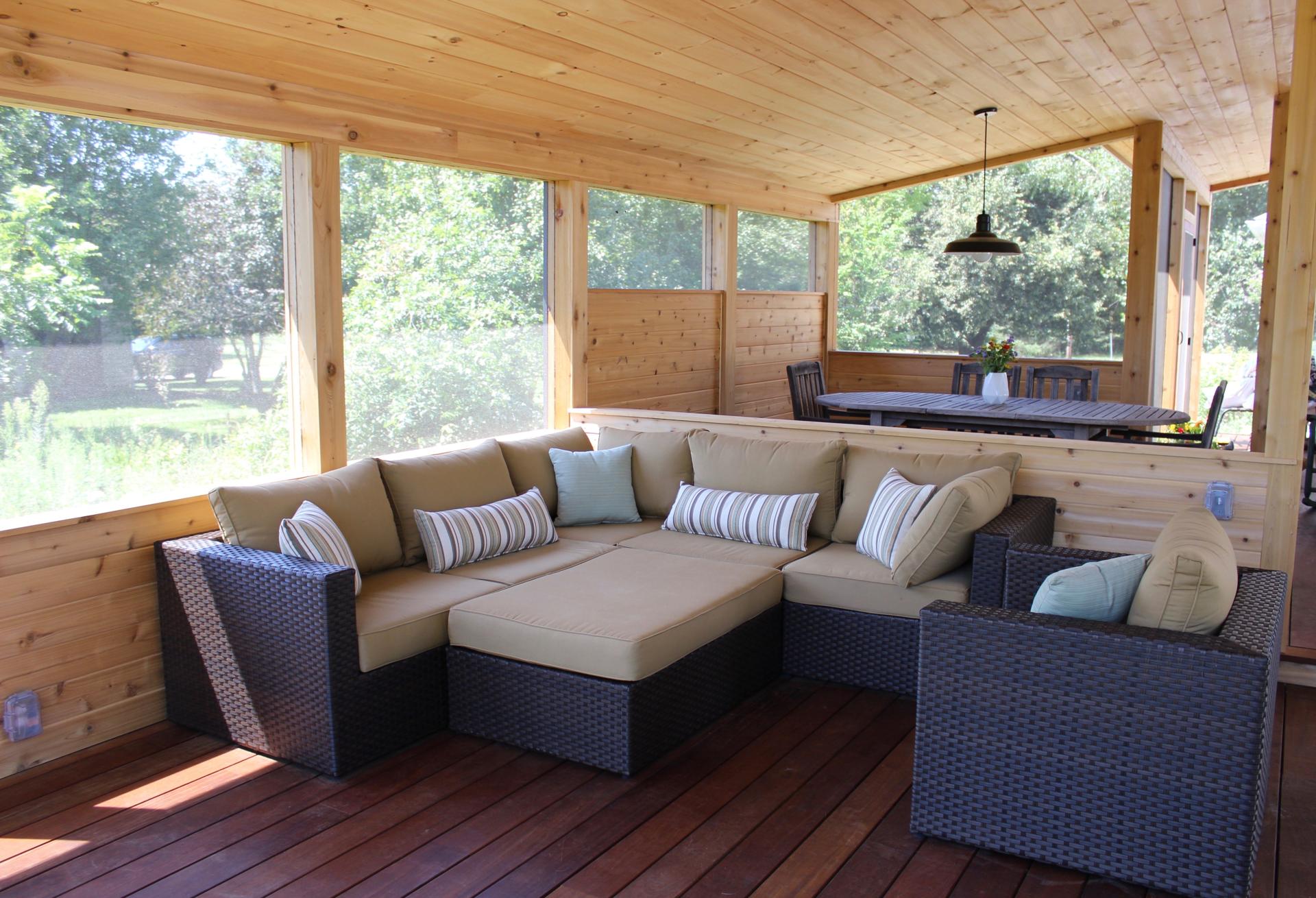 By opening up the south side of the home with large expanses of screening, the porch increases air circulation and “acts as a huge lung for the rest of the house,”Stokes said. 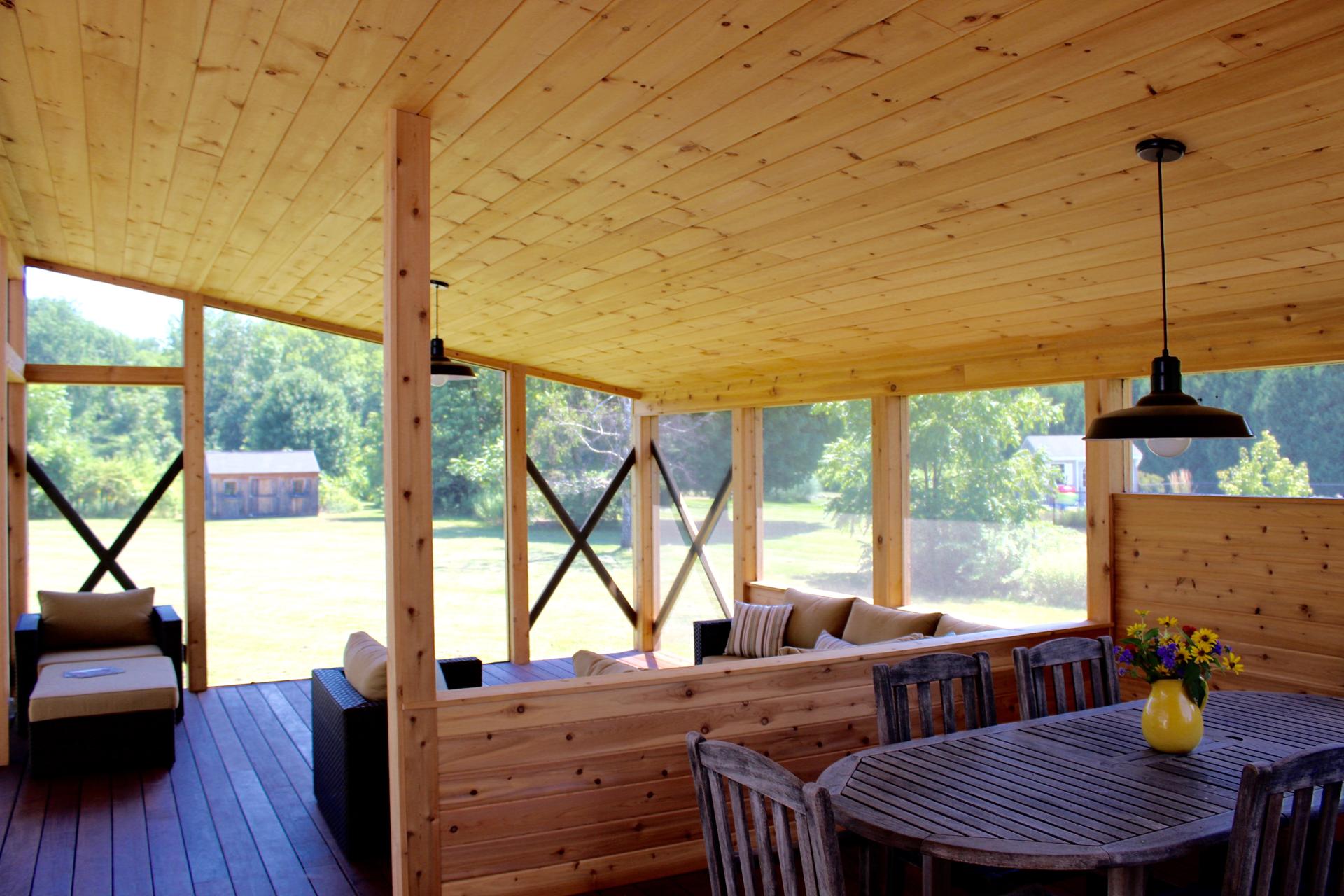 The clients often end up sleeping in the breezy space, which was designed to maximize views of Mount Sugarloaf.