As a frequent visitor to the "Dog Park" here in Northampton (the land which is leased by Smith Voc where many local dog owners currently take their dogs for off leash walks), I was tickled by the presence of The Goat Girls of Amherst, MA at the park, earlier this summer. The goats were contained within a well marked electric fence, and within a short time frame, they had munched away a large area of unwanted shrubs, vines and weeds. It was fun to see the adorable animals on our walks (though I confess, my dog did receive a shock while trying to get a sniff of the industrious animals), and I was amazed to see that they worked so quickly and did such a great job! I was equally tickled to see the following article today in the Daily Hampshire Gazette about the same Goat Girls. Round up not needed! These goats do a great job of clearing yards, leaving behind a great looking finished product! If you have land which needs to be cleared, look them up!

No thicket too thick: With guts of steel, the Goat Girls of Amherst are here to clear 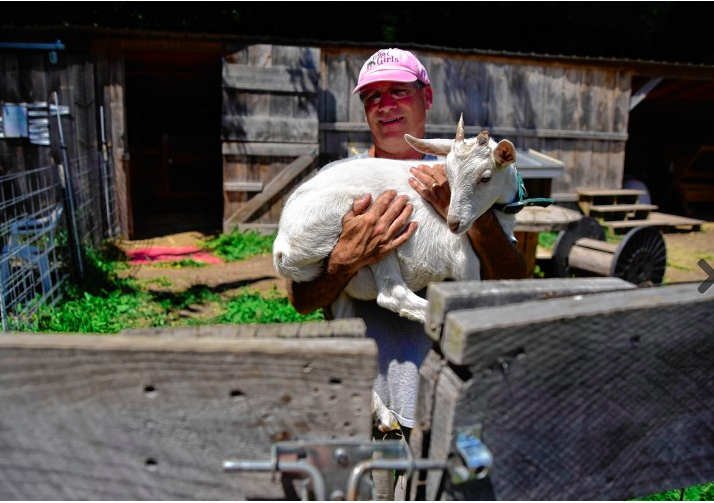 Joe Wille carries Lily to the trailer to be transported to a landscape job. Gazette Staff/Andrew Whitaker

Autumn the goat is working hard to devour a tangle of weeds that have overgrown on the border of a backyard in Amherst.

Her ears flop back as she munches on some poison ivy, leaves dangling from her mouth. After four days of non-stop nibbling, with the help of five other goats, she is just about done clearing the yard of invasive plants like bittersweet and Virginia creeper.

“The goats are diligent, hardworking —They don’t know that they are working, but they are,” said Peter Vickery, the property owner on Cherry Lane.

After years of wondering what to do about the undergrowth that had overtaken the yard, his wife, Meg Vickery, decided to choose an environmentally friendly alternative to herbicide and a quieter choice than a weed whacker. They hired Goat Girls, a company harnessing the eating power of goats in what is essentially a land-clearing and lawn-mowing service based in Amherst.

For a minimum of $500, the company will deliver a herd of goats to properties in any of several Hampshire and Franklin County towns to devour just about any foliage.

Before the goats are sent out, the land is inspected for plants that might be poisonous to the animals, but for the most part, these creatures have guts made of steel, able to munch through almost anything, said Hope Crolius, owner of the company.

“We say we are just going to let the kids play in the backyard with the poison ivy,” Vickery said.

Getting down to business

Before the goats go to work, Crolius’s one full-time employee, goat herder Joe Wille, sets up a temporary electric fence to keep the goats in and the coyotes and bears out.

Homeowners are asked to check on the goats twice a day to look for signs of illness and make sure the animals look bright, alert and responsive. Sometimes they need fresh water, but the thick weeds provide them with all the food they need.

The company’s more than two-dozen goats have exceptionally diverse diets, they specialize in invasive plants, typically munching through more than 25 jobs per year ranging from golf courses to community gardens. This year the goats also devoured more than 250 Christmas trees dropped off by local residents at the Goat Girls headquarters, a rented plot of land at Many Hands Farm on Pelham Road in Amherst, where the goats spend most of their time when they aren’t working.

“They’re economical, they’re earth-friendly, plus they are the neighborhood entertainment,” said another homeowner Sue Ellen Bisgaard. She hired the Goat Girls a few weeks ago to clear the wooded land at her house in Pelham, where about eight goats gnawed through two acres of brush in only two weeks.

Before the goats showed up, the weeds were so overgrown that Bisgaard couldn’t fathom walking through the property. She didn’t know what the plants were, she just knew she wanted them gone. “It really is just fighting the woods from taking over my land — I have eight acres,” she said.

Not only are the goats pleasant company, in this case their services came at a decent price, she said.

Bisgaard’s landscaper gave her a quote of about $1,000 to clear the property, while the goats provided the same service for half the price.

Depending on the size of the job, the number of goats needed varies. Six animals were used to clear the roughly 300 feet of land in the Vickery backyard.

Seven goats can clear a quarter acre in about a week, said Crolius. So far there have been no complaints about the productivity of the animals, she said.

A daydream come to life

Before starting the business in 2011, Crolius had worked in a high-pressure job as a journalist, often fantacizing about being a shepherd in biblical times.

“You’re working with nature to manage land. The goats are part of nature,” said Crolius.

Many of her clients live in neighborhoods that are not zoned for livestock and love having the chance to spend time with the animals, she said.

“We have an ancestral memory of the role of livestock in our everyday lives — these animals are remarkable. I don’t think we have had a client yet who isn’t delighted by the antics of these goats.”

Crolius, who started with three goats, has every kind of goat from Nigerian Dwarfs, a miniature dairy goat with West African ancestry, to Saanens, a Swiss dairy goat. She isn’t selective about breed because all goats tend to eat at the same rate.

Within a few weeks of acquiring her first herd, Crolious said, the phone started ringing with requests for jobs and the company has kept growing since.

“They have been so efficient,” said Meg Vickery. “I often thought that sheep and goats should be doing this work.”

While abroad in England, she said, she started to think about the concept of goat lawn maintenance, where the animals can be seen grazing beside highways.

“I was impressed by the intersection of agriculture and daily life.”

When she returned to the United States she noticed the invasive plants overtaking her yard, did some research and found Goat Girls.

She’s happy not to have to dump weed killer on her property.

“For me, it’s a more gentle way of achieving the same end and it has less environmental impact,” Vickery said. “We avoid, as much as possible, using herbicides.”

While the Vickerys were worried that the goats would make noise at night, they have barely made a peep. They are mild mannered and they keep to themselves, said Peter Vickery.

Since the goats got to work, the couple rediscovered property lines and found a few soccer balls and an animal skull. A few trees were also saved from strangulation by invasive vines.

They are looking forward to planting flowers on some of the re-claimed land. “I am surprised because it is so much more open. We can see what trees we want to preserve and which mangy ones we want to get rid of,” said Peter Vickery. As he talks, a short distance away the Swiss dairy goat Muffin is sunbathing in the brush, chewing on a few twigs, the remains of the fourth and final day on the job for her and the rest of the crew.

For more information about Goat Girls, visit http://www.thegoatgirls.com or call 461-6832.

Lisa Spear can be reached at lspear@gazettenet.com.