Great news for Northampton and Amherst area residents!  The Hitchcock Center for the Environment will be breaking ground on the construction of their new, uber-energy efficient building on the campus of Hampshire College on May 1st.  The new building will have all the green construction bells and whistles you would expect: roof-mounted solar panels, rain collection barrels, composting toilets and a naturally ventilated structure.  The construction of the building will follow the strict mandates of the Living Building Challenge, defined as "a building certification program, advocacy tool and philosophy that defines the most advanced measure of sustainability in the built environment possible today and acts to rapidly diminish the gap between the current limits and the end-game positive solutions we seek.

The Hitchcock Center strives to connect people with nature and the environment with it's educational programs.  It seems that housing the organization in a new home which also ties people back to nature makes good sense.  It will be exciting to see the building in it's completion this fall.  Read on for the full article published in the Daily Hampshire Gazette on April 22nd, 2015 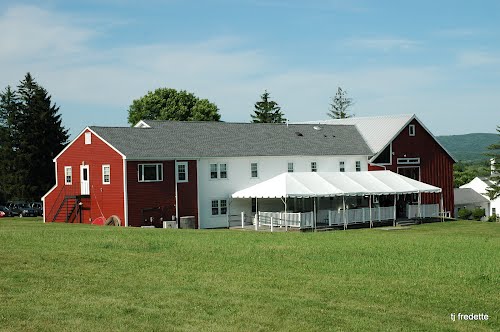 The Red Barn at Hampshire College, near where the new Hitchcock Center will be built

AMHERST — Construction of the $5.8 million building that will house the Hitchcock Center for the Environment will begin with a ceremonial groundbreaking May 1 on the Hampshire College campus on West Street.

The 9,000-square-foot building is expected to be New England’s first public environmental education facility to meet various standards under the Living Building Challenge, which mandates energy and water self-sufficiency and use of green materials, and will be large enough to accommodate the 11,500 children and adults participating in its environmental programs by 2020.

The building will go up in a hay field between the Red Barn and the Hampshire College Farm Center. The Hitchcock Center and college agreed to a 95-year ground lease April 17 on the land. The building should be complete and ready for programs in the fall of 2016.

Julie Johnson, executive director of the Hitchcock Center, said it is committed to the philosophy of the Living Building Challenge as part of its educational mission.

“The process will transform how we think about design and construction as an opportunity to benefit both the environment and community life,” Johnson said.

Speakers at the ceremony, scheduled to start at 4:30 p.m., are expected to include state Senate President Stanley Rosenberg and Rep. Ellen Story, both of Amherst; Dan Burgess, acting commissioner of the state Department of Energy Resources; and Hampshire College President Jonathan Lash.

Founded in 1962, the Hitchcock Center fosters awareness and understanding of the environment through its programs, many aimed at children. At the new site, existing programs will be strengthened and new ones added using both the building and the surrounding landscapes, where the center will have access to miles of trails and a variety of ecological habitats.

The new location is 2.5 miles south of the renovated carriage house at the Larch Hill Conservation Area on South Pleasant Street. This town-owned building is too small for the growing number of participants and there is little opportunity to expand on that site due to wetlands and other issues.

What the future holds for the current building, which Hitchcock has used for more than 40 years, is unknown. Johnson said the center has a lease with the town through 2020 and is discussing with town officials how Hitchcock might use the building for the remaining five years of its lease.

Assistant Town Manager David Ziomek said the conservation restriction on the 25-acre Larch Hill property explicitly states that as long as the building remains on site, it is to be used for environmental education and similar outreach purposes.

He anticipates the building will remain useful, perhaps as a satellite teaching facility for Hitchcock.

“We’ll continue to have those conversations with Hitchcock to see where that goes,” Ziomek said.

The land, which is bordered on two sides by preserved farmland, will remain protected and the trails that extend through it will remain open, as they are today, to the public from dawn to dusk, 365 days a year, Ziomek said.

The groundbreaking for the new Hitchcock Center site will also start the public phase of the capital campaign, which has already raised $4.5 million through support from the Kendeda Fund, the Massachusetts Department of Energy Resources, the Massachusetts Cultural Facilities Fund, and local individuals, foundations and businesses.

Parking for the groundbreaking will be at the Red Barn.

Scott Merzbach can be reached at smerzbach@gazettenet.com.